The Kenya Interior Ministry’s announcement last week of its intention to close two major camps has increased uncertainty for hundreds of thousands of refugees, leaving many of them distraught.

“I am not ready to be repatriated to Somalia,” fretted Muslima Abdullahi, an 80-year-old woman living in Hagadera, part of the Dadaab refugee complex in northeastern Kenya.

“I have nine orphaned children here,” she added. Years ago, terrified by insecurity, she left her homeland and she’s wary of returning now. “My house has been taken. I have no property or livestock. I don’t have a job ahead of me. I am not ready for the process” of repatriation.

Ready or not, Kenya’s government says she and other refugees will have no choice but to leave the country. On March 24, Interior Minister Fred Matiangi announced Kenya had given the U.N. Refugee Agency 14 days to present a plan to close Dadaab and Kakuma camps.

Dadaab and Kakuma camps, both located in northern Kenya, together shelter more than 410,000 refugees and asylum-seekers. More than half of their population come from Somalia and roughly a quarter from South Sudan. The rest come from the Democratic Republic of Congo, Ethiopia, Sudan and elsewhere in the region.

Abdullahi Osman Haji was among the first refugees to arrive at Dadaab nearly 30 years ago, driven from Somalia by civil war. He married in the camp and has been raising 12 children there. He longs for Somalia but considers that unrealistic, given its fragile government and the ongoing threat of al-Shabab terrorist attacks. 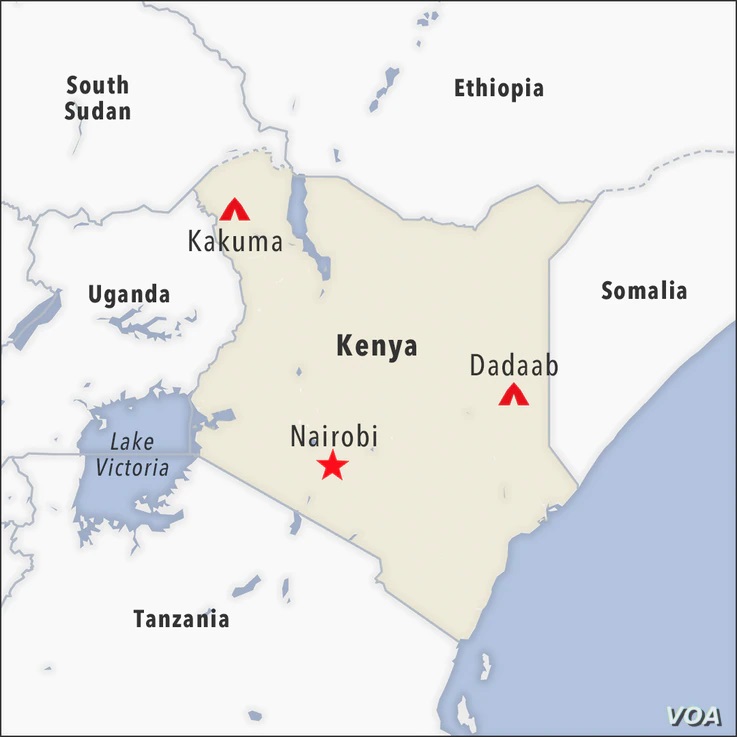 “Closing the camps will have [an] adverse impact on us,” Haji said of refugees.

The United Nations High Commission for Refugees (UNHCR) shares that concern. It issued a statement last week saying the decision would affect “the protection of refugees in Kenya, including in the context of the ongoing COVID-19 pandemic.”

The UNHCR said it was ready to support Kenya’s government in strengthening ongoing efforts “to find solutions that are orderly, sustainable and respect refugee rights.”

Kenya’s announcement came without explanation about why it seeks the camps’ closures now. VOA made repeated but unsuccessful attempts to get a comment from Kenyan officials.

The Nairobi government in 2016 had called for shuttering Dadaab, after intelligence reports indicated two major al-Shabab attacks in 2013 and 2015 had involved participants from within the camp, but no evidence linking the camps with al-Shabab has been publicly released. Kenya’s High Court ruled in early 2017 that closing the camp would be unconstitutional.

Somalia’s ambassador to Kenya, Mohamud Ahmed Nur, accuses Kenya of politicizing refugee affairs. He contends Kenya’s ultimatum on the camps “is because of the maritime dispute.”

That border disagreement, festering for years, is over control of a 100,000-square-kilometer stretch of the Indian Ocean, which contains an abundance of fish in its waters and possible oil and gas deposits below. The case went before The Hague-based International Court of Justice (ICJ) in mid-March, though Kenya refused to attend the weeklong hearing. The ICJ, the United Nations’ highest court, could take months to reach a decision.

Aden Barre Duale, a lawmaker and former majority leader in Kenya’s National Assembly as well as an ethnic Somali, thinks the maritime dispute may have been a factor in his government’s call for the camp closing. But he doesn’t support the measure.

“This case is not legal, not implementable,” Duale said.

He represents the northeast Kenyan area in which Dadaab is located. His constituents and “their leaders, religious leaders … do not have any problems with the Somali community.”

Both Dadaab and Kakuma camps opened in the 1990s, offering UNHCR-administered havens to people fleeing civil wars and strife in Somalia and Sudan. Another wave of Somalis arrived in Kenya in 2011, driven from their homeland by drought and swelling their numbers to nearly half-a-million. The number of refugees in Dadaab declined to the current figure of 230,000 after a 2013 agreement among Kenya, Somalia and the UNHCR supporting refugees returning voluntarily to Somalia.

UNHCR refugee programs in Kenya and elsewhere are feeling the strain of insufficient funding, Glenn Jusnes, a spokesperson for UNHCR Kenya, told VOA in an email response.

“The COVID-19 pandemic has exacerbated the already dire humanitarian needs globally – particularly in the low and middle-income countries that are currently hosting more than 85% of the world’s refugees,” he wrote.

The related economic slowdown has hurt. In the 2020 calendar year, UNHCR Kenya received $94 million – some $70 million less than it had sought, Jusnes said. For 2021, it had received approximately $33 million as of March 9, leaving a funding gap of more than $116 million.

Globally, the UNHCR’s 2020 budget was over $9.1 billion but it received some $5.2 billion, leaving a 43% funding gap, Jusnes said. He noted that underfunding cuts into the UNHCR’s protection, assistance and resilience activities.

In Kenya, infrastructure and road improvement projects in the Kakuma refugee camp and the nearby Kalobeyei settlement were suspended in early 2020. “Poor road conditions … have complicated access and assistance to refugees,” and “significant amounts” of money have gone to vehicle repairs instead of to direct aid to refugees and host communities, Jusnes said.

While Kenya wants to close the camps, residents of Dadaab and Kakuma say they have no safe alternatives.

Shamsa Mohamed Aden was among the refugees who voluntarily returned in 2017 to Kismayo, her southeastern Somali hometown. But she and her household, including four children, “couldn’t get the essentials of life, such as education and clean water.”

They recently returned to Hagadera, a camp in the Dadaab refugee complex, and Aden is reluctant to go back. She said of herself, “All Shamsa can do is to wait for UNHCR’s help again.”