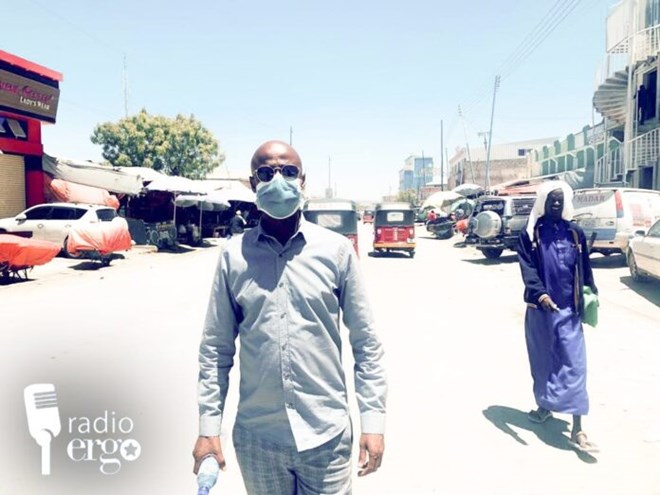 (ERGO) – Bashar Elmi Yey, a resident of Borama in Somaliland, has been wearing a facemask since the outbreak of COVID19 in March 2020, and he is still being publicly shamed quite frequently and called jeering names like ‘Coronavirus’ for wearing a mask.

“Some people ask me why I am hiding my face,” he told Radio Ergo.

“They view me like I am infected with the virus. Some even push me away from them when I am passing through crowded places.”

According to Bashar, many people in the city in the northwestern region of Awdal are dismissing the COVID19 safety measures, even though it is already a year since the disease was first reported in Somalia and it has now resurged.

“They seem not to understand that the facemask and other preventive measures will save them and their relatives from this dangerous disease,” he said.

Awdal ministry of health coordinator, Dr Mustafa Mumin Muse, told Radio Ergo that between January and March 2021 they recorded 54 COVID19 cases in Borama, 52 of them in March.

Mustafa blamed the sharply rising number of cases on the public’s reluctance to follow the measures put in place to prevent the spread of the disease.

“Our people haven’t understood that the facemask limits the spread of the virus,” said Mustafa.

Said Hassan Habane, a lecturer at Amoud University, interpreted people’s condemnation of those wearing masks as resulting from the pain of being visually reminded of the existence of this disease. Habane noted that men face more criticisms than women because people are used to seeing women wearing the burqa, whereas a mask is something new for men in society.

Said Hassan Maxamed, 44, returned to Borama from abroad early this year. He has been wearing a facemask routinely and says he has been nicknamed ‘facemask.’

“At times I walk to distant areas because no one will share a bajaj [tuk tuk taxi] with me. People are so scared of me as if I am a carrier of the disease!” Hassan exclaimed.

Sometimes when he calls a relative or a friend, he said they tell him they cannot hear him, and make fun of him asking if he even wears his mask at home.

A group of 20 health workers have been going house to house in the suburbs of Borama passing on COVID19 awareness information and advice, as part of a UN-supported emergency risk awareness campaign.

Mohamed Nur Muse, one of these health workers in Sheikh Ali Jawhar village, told Radio Ergo that they inform people about the need to wear facemasks, although many residents do not respond favourably to their visit.

“Some people tell us to leave them alone. They view us as carriers of bad news,” said Mohamed.

However, he said the group remained hopeful that the continuing awareness would have some positive effect on the behaviour of the residents towards the disease.