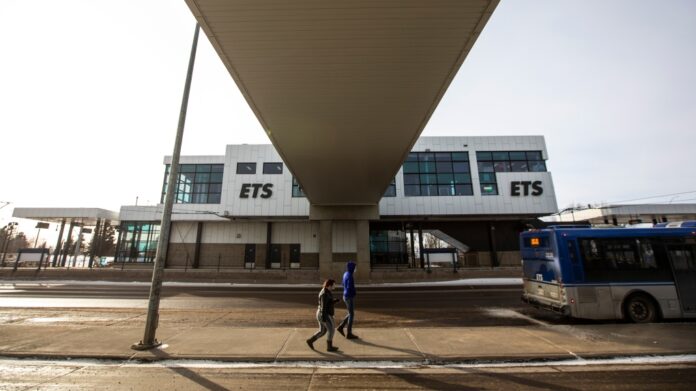 The Century Park LRT station is shown in Edmonton on Friday, February 26, 2021. A Black Muslim woman was threatened and subjected to racial slurs at the station. THE CANADIAN PRESS/Jason Franson

For months Alberta’s Muslim community has been on edge. A series of racially motivated assaults against mostly Black, Muslim women in Calgary and Edmonton has left many in the community feeling anxious and unsafe.

“It has been a very traumatic time for those victims as well as for the Muslim community at large,” said Fatema Abdalla, communications coordinator with the National Council of Canadian Muslims (NCCM).

In early December, two Somali women wearing hijabs were attacked outside a south Edmonton shopping centre in what police said was a “hate-motivated incident.”

Less than a week later, a 23-year-old Black woman wearing a hijab was at an Edmonton transit station when she was approached by a woman she didn’t know. Without being provoked, police said the suspect allegedly tried to hit the woman in the head with a shopping bag while yelling “racially-motivated obscenities at her.”

In February, a woman wearing a hijab was waiting inside the University of Alberta transit centre when she was approached by a man she didn’t know. Police said he made racial comments and postured “as though he was about to assault her.”

In an unrelated incident on the same day, a woman wearing a burka was walking on the sidewalk when she was approached by an unknown man who stopped her, yelled and swore at her and pushed her to the ground.
Most recently, a teenage girl wearing a hijab was assaulted in Calgary while walking along the river pathway at Prince’s Island Park last Sunday. According to police, the girl was walking with another teenager when a woman confronted them and began directing “racially motivated slurs” at them.

Police said they tried to walk away but the suspect pushed one of them to the ground, tore off her hijab, punched her in the face and kicked her in the stomach.“The attacks on Muslim women showcase how large of an issue this is,” said Abdulla. “There is a need for action to stop street harassment and a municipal-provincial plan of action.”

Edmonton mayor, Don Iveson says the city has improved security around the city’s transit stations but he believes there is also a larger problem at play.

“With the tiki torches that we saw here in Edmonton as part of the anti-mask rally last month, I think there is a needed conversation about ensuring that symbols of hate are properly recognized,” he said.

The Feb. 20 rally protesting COVID-19 restrictions, saw a number of protestors carrying tiki torches through downtown Edmonton to the provincial legislature.  Tiki torches have become a symbol of racism when used at rallies since they were carried by white nationalists during a notoriously violent and deadly weekend in Charlottesville, Va., in 2017.

Calgary and Edmonton have seen weekly protests against COVID-19 restrictions. Along with the use of tiki torches, some rallies have also seen the visible presence of known white nationalist groups like the Proud Boys.

“The freedom rallies are not freedom rallies, you call them whatever you want — call it a ‘Smurt Parade’ — I don’t care, it’s a hate rally,” said Calgary city councilor, Jyoti Gondek.

“It’s an opportunity that people have taken to be hateful and awful and that can’t happen … that needs to stop.”

Edmonton’s police chief has condemned the use of tiki torches at rallies but Dale McFee says there’s little legally that can be done.

During a news conference in early March, McFee said that while he knows that the rally was viewed by many as a racist event, the Edmonton Police Service had members of its hate crimes unit there and did not see anything that would legally meet the definition of a hate crime.

Acting Detective Craig Collins, hate crimes co-ordinator for the Calgary Police Service, says to date there has been no evidence of a hate crime at any of the Calgary protests against COVID-19 restrictions.

“I have yet to receive a formal complaint from anybody about the specific criminal act that has occurred at any of these rallies,” Collins said during a news conference on Monday.

“As I said before CPS will investigate to the fullest extent any criminal extent that is brought to us but public opinion is not a basis for a police investigation to start.”