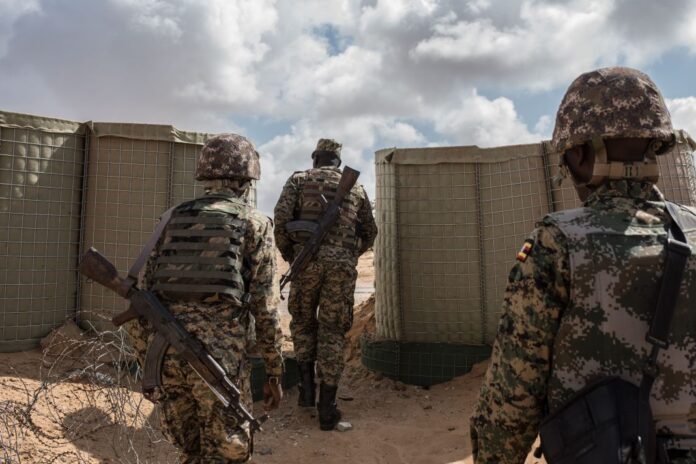 oldiers of the Uganda People’s Defense Force (UPDF) serving in the African Union Mission in Somalia (AMISOM) at AMISOM’s Forward Operating Base in Somalia. (Photo by Andrew Renneisen/Getty Images)

The African Union Mission in Somalia (AMISOM) handed over control of Afgoye military base to the Somali National Army (SNA) as part of plans ensure the transfer of security responsibility to Somali forces.

Afgoye town was wrested from Al-Shabaab’s control in May 2012 in a joint operation of AMISOM and the SNA. The town, which is situated along the main supply route to north, west and south Somalia, had since been secured by AMISOM’s Ugandan troops.

The base was handed over on Wednesday by the AMISOM Deputy Force Commander in charge of Operations and Plans, Maj. Gen. William Kitsao Shume to the Governor of the Lower Shabelle region, Abdulkadir Mohamed Nur Siidi.

Ugandan troops are deployed in an area of Somalia named Sector 1, which comprises the regions of Banadir and Lower Shabelle.

“This is in line with AMISOM mandate, the Somalia Transition Plan and other strategic documents that envision handing over priority locations as initial stages towards a handing over of security responsibilities to Somali Security Forces,” Shume said.

Shume appealed to the SNA to do its best to protect the area, secure the neighbouring areas and reach out to AMISOM commanders for assistance where necessary.

Shume added that AMISOM would hand over other such areas, referred to as Forward Operating Bases (FOB), in due course.

Siidi, on his part, welcomed the handover describing the move as a chance for Somali security forces to handle greater tasks.

“If we hold our ground and ensure the base is not breached, then we will be able to take over all the other FOBs in the country. We want to stand on our own feet, and to strengthen the capacity of the government,” he said.

Since July 2017, six FOBs, including Afgoye, have been handed over to Somali security forces by AMISOM.

AMISOM troops were first deployed in Somalia in March 2007 and have since helped Somali security forces push the militant group out of much of southern Somalia including most major towns and cities.