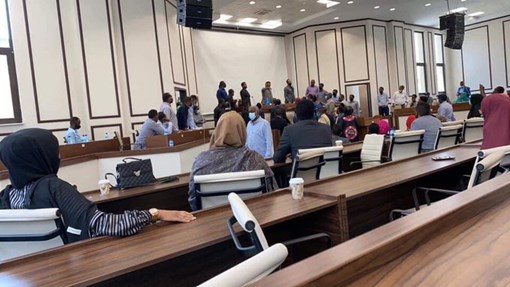 Mogadishu (HOL) – A federal parliament session in Mogadishu was adjourned on Saturday after a major disturbance caused by Members of Parliament prevented MPs from opening the hearing.

Parliamentary speaker Mohamed Mursal called the session to discuss COVID-19. Still, many opposition MPs suspected that the true purpose was to vote on term extension for President Farmajo, whose constitutional mandate expired on February 8.

The ire raised by Farmajo’s detractors meant that parliament would lack the necessary quorum to pass a vote.

Abdirizak Mohamed, a federal MP and former Minister of Internal Security, said that his colleagues were targeted by plain-clothed security personnel inside parliament for voicing their opposition to a term extension.

“Somalia has become a police state. Today the legislature lost all credibility as an independent institution after deploying plain-clothed army inside the parliament, violating its sanctity. MPs are also targeted for expressing their opinion in opposition to term extension.”

In a video posted on social media, Mohamed Mursal rises from his chair and signals for the MPS to quiet down. Shortly after, Mursal leaves the session accompanied by his deputy speaker and several men.

President Farmajo is facing mounting pressure to find a solution to the political crisis facing Somalia. At the behest of the international community, he organized national electoral talks with Federal Member State leaders, but Jubaland and Puntland snubbed those talks. Somalia’s international partners have been unequivocal that they would not support any parallel or partial elections.

Mohamed Mursal said he would announce when the session will resume.