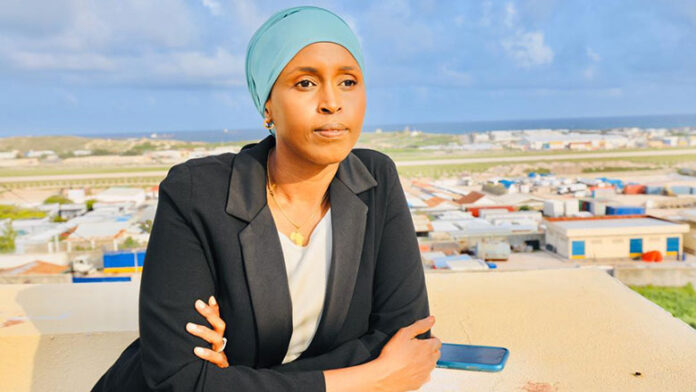 NAIROBI, March 24, 2021—When a crisis hits Somalia, women and girls often bear the worst of it.

Somalia is currently facing multiple shocks, including the COVID-19 (coronavirus) pandemic, locust invasions, food insecurity and ongoing insurgency. As conflict across the country increases, so too does the threat of harassment, kidnapping and sexual violence against women and girls. As locusts destroy crops and food insecurity surges, women are left vulnerable to violence and theft as the men leave them behind unprotected to search for food or work.

Lockdowns and other measures meant to help slow the spread of COVID-19 has put girls at higher risk for child marriage and female genital mutilation. These challenges are further compounded by long-term, deep-seated issues around inclusivity and equity in the country’s political and governance structures. Yet, development can’t be successful unless it includes equal participation of women and girls. Enter Hodan Ali, Senior Advisor for the Mayor of Mogadishu, Director for Humanitarian Affairs and Durable Solutions Unit in the Benadir municipality. Ali is also the co-founder of LeadNow, a grassroots movement aimed at empowering the voice of women on governance affairs.

“Women continue to suffer from the lack of political representation in critical governance sectors, especially parliament with rampant abuses and neglect of women’s issues and proposals of violent laws that impede on the human rights of women and children,” Hodan said. “Without just representation for women there will be further erosions in democracy and human rights as our governance structures fail to represent the voices of so many women and their respective intersections.”

Presently, women account for 24% of the country’s parliamentary seats. The current election agreement promised to reserve 30% of the seats in Parliament for women’s representation. But while Hodan says the recent provision marks a bold step in the right direction, it barely scratches the surface of the scale of efforts needed to widen inclusivity in the country.

“Traditionally it has been forced upon male politicians to create space for women and that makes it a sort of tokenism,” Hodan said. “Unfortunately, it does not really create a genuine space where women can come and have their voices evaluated, challenged and accepted in the same way as men.”

With pervasive concern over whether the country can conduct a free and fair poll, Hodan argues that while the fear of a potential slide back to instability is warranted, the citizens of Somalia should not allow  efforts towards remedying gaping inequalities to be relegated to the back burner. An estimated 2.5 to 3.0 million people in Somalia are internally displaced. Hodan believes that the country’s leadership should prioritise widening inclusion to this category if the country is to secure long-term stability.

Hodan is now challenging Somalia’s development partners to leverage their role as key financiers of the public sector’s day-to-day operations to accelerate the pace at which efforts towards greater inclusivity and equity are realized.

“Somalia is heavily supported by international partners and dollars from the international community. I am a dual citizen and I pay my taxes towards the UN mission to Somalia,” she said. “I then am able to ask how my Canadian taxpayer money is being used in improving the lives of women in Somalia.”

Hodan holds that a more inclusive and equitable will be a vital pillar in helping to strengthen the resilience of the country’s private sector which serves as a pivotal growth engine, alongside aid driven investment.

“The World Bank recognizes importance of addressing gender disparities and dynamics underpinning exclusion in Somalia a critical facet of smart development policy and practice and is working to intensify efforts to advance gender equity and broader social inclusion across all its projects,” said Verena Phipps, World Bank Senior Social Development Specialist.  “Advancing access to opportunities and voice is a critical pathway to ensuring sustained growth and shared prosperity and is critical to the consolidation of peace and security in conditions of ongoing conflict and instability.”

In support of these efforts, the Bank recently launched the establishment of the Somalia Gender Equality Platform, a multi-year and multi-sectoral initiative to intensify Bank efforts to promote gender equality and inclusion of those left behind more broadly. The Platform will look to increase technical support to integration of gender considerations across all operations, conduct frontier research, and identify innovative interventions, as well as expand policy dialogue and knowledge sharing across government and development partners.