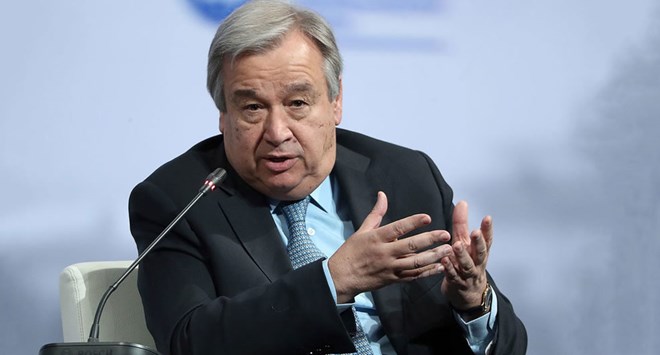 Mogadishu (HOL) – The UN Secretary-General, António Guterres, has warned that the continued political standoff in Somalia threatens its stability as it grapples with a prolonged humanitarian crisis and existing security threats from Al-Shabab militants.

“The Secretary-General reiterates his deep concern at the continued political impasse regarding the holding of elections in Somalia, despite several rounds of consultations amongst Somali political actors, both at technical and principal levels.  The protracted stalemate carries significant risks for the stability of the country and the welfare of the Somali people, who are already facing a dire humanitarian situation and precarious security conditions.”

Somalia is currently experiencing a deterioration of humanitarian conditions that is punctuated by a looming drought.

Somalia is facing a severe water shortage that has led to the displacement of over 80,000 people in recent months. The droughts are causing the deaths of livestock – Somalia’s largest export – and crops, making even more Somalis food insecure. According to some recent data published by Save the Children, as many as three-quarters of Somalia’s families lack safe drinking water. The drought conditions are expected to continue into mid-2021 as La Niña led to decreased rainfall in the 2020 Deyr rainy season.

In addition to the lack of water, Somalia is also experiencing extensive floods, desert locust infestations and a second surge of COVID-19 cases across the country. All this while continuing to live under crushing poverty and a militant insurgency.

Guterres was joined by the EU’s High Representative, Josep Borrell, who echoed the UN Chief’s sentiments in saying that “the current lack of agreement seriously delays the pace of urgently needed reforms, for the detriment of Somalia’s citizens.”

“When individual priorities prevail over the general interest of the country, political leaders discredit themselves to represent their citizens. Those who undermine the dialogue or resort to the use of violence will be exposed to measures and will face the consequences of their actions.”

The EU said it would only throw its weight behind the September 17 agreement.

“Somalia’s federal and Member State leaders must honour their responsibilities to the people of Somalia and hold Parliamentary and Presidential elections immediately. No alternative, unilateral or partial process will receive our support.”

António Guterres reiterated the US Embassy’s call for Somalia’s leaders to meet without preconditions and solve their electoral debacle once and for all.

“The Secretary-General urges the Federal Government of Somalia and all Federal Member State leaders to engage in dialogue and hold the planned summit urgently and without preconditions to resolve their differences on the electoral process and reach consensus on the way forward.  He welcomes the commitment of Somali leaders to the 17 September electoral model, and calls on them to agree quickly on its swift implementation and the holding of elections without further delay.”

The UN Chief’s comments come as talks between the Federal Government and the Federal Member States are on the brink of collapse after Puntland and Jubaland snubbed the negotiations for a meeting with the National Salvation Forum.

The NSF is Somalia’s newest opposition alliance that includes the Council of Presidential Candidates (CPC), Jubaland and Puntland’s presidents and Senate Speaker Abdi Hashi. The forum penned an open letter to Antonio Guterres and others in the international community blasting President Farmajo’s leadership and appealing to the international community to intervene to avert a political crisis.