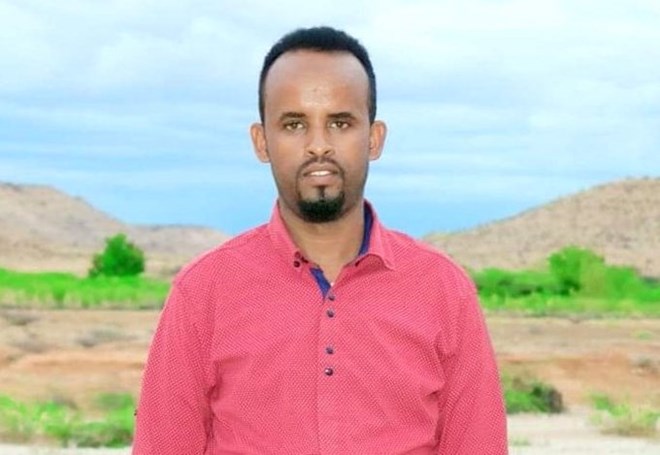 Mogadishu (HOL) – A journalist who was sentenced to a three-year prison term by Puntland’s Military High Court last Wednesday in Garowe has been released from custody on Monday after receiving a pardon from Puntland President Said Abdullahi Deni.

Puntland Security Forces arrested Kilwe Adan Farah for his coverage of protests against rising inflation in Puntland in late December. He was charged with a host of crimes – including murder – and held in jail for 84 days prior to his release.

“I am glad to be freed today. I am doing well and back to my family. I thank SJS and its lawyers Avv. Mustafe Mohamed Jama and barrister Michael Polak for their long efforts to my freedom,” Kilwe told the Somali Journalists Syndicate shortly after his release from the Garowe Central Prison.

Local and international journalist trade unions welcomed Farah’s release but said it was politically motivated and that he should not have been arrested and convicted for practicing journalism.

“We welcome the release of journalist Kilwe Adan Farah, but he should not have spent a single day in jail because of journalistic work. The decision of the Puntland President to pardon Kilwe reverses this glaring miscarriage of justice that had seen our colleague sentenced to an underserved three years in jail,” said NUSOJ Secretary General Omar Faruk Osman.

“We hope that this is a lesson for all involved and will lead to genuine respect for media freedom that will particularly ensure journalists can go about their duties without the threat of arbitrary arrests. Journalists have a right to go about their duties without illegal interference from any quarters just as citizens have a right to credible information generated by journalists,” Osman added.

Abdalla Ahmed Mumin, the Secretary-General of the SJS, called on Puntland to investigate Kilwe’s arrest and detainment details.

“While we take the Puntland president’s decree to pardon our colleague Kilwe as a welcome gesture, we reiterate that he has not committed any crime, and as the court indicated several times, he remains innocent. He should not have been detained in the first place. We call for the Puntland authorities to immediately start investigating those who detained, tortured and abused Kilwe through the military court process,” Abdalla Ahmed Mumin, the Secretary-General of the SJS, said in a statement.

Rights groups dismissed the trial as a “kangaroo court” and called on President Deni to immediately and unconditionally free Kilwe. The Committee to Protect Journalists said a military court sentenced Kilwe with neither his family nor lawyer present.

Mustafe Mohamed Jama, Kilwe’s lawyer, said that his client was a victim of judicial harassment.

“I’m relieved that my client Kilwe is free today. He was detained solely for conducting his job as a journalist, and despite no evidence, he has witnessed a prolonged period of judicial harassment and continued disregard of the law.”