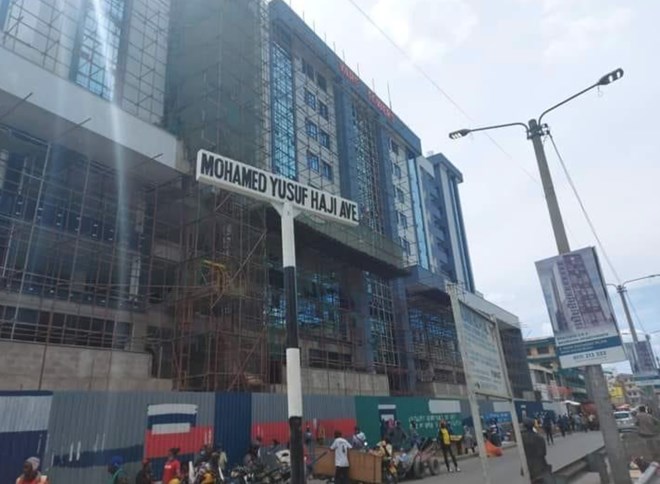 Barely a month after his demise, the late Garissa Senator Yusuf Haji has finally been honoured.

According to the Nairobi county assembly, this was the best way to honour and recognise Haji for his 55-year public service to the nation.

Roads and Transport executive Mohammed Dagane supervised the works at Eastleigh on Thursday when the pole bearing Haji’s name was erected.

The motion was passed early this month. It resolved that the Nairobi Metropolitan Services and the county government name or rename a road in recognition of the late senator for his immeasurable contribution to the prosperity and well=being of Kenyans during his 55-year record of public service.

“Haji’s exceptional negotiations and strategic mediation skills cannot go unrecognized as the whole country saw his efforts to promote peace and stability in Somalia and beyond was seen under the operation Linda Nchi in 2011,” he noted.

The Nairobi legislator also said the senator’s remarkable attribute saw him chosen by President Uhuru Kenyatta to steward the BBI, a task that Guyo said Haji took on with earnest zeal and delivered a noteworthy constitutional bill.

A number of roads and streets within Nairobi have previously been named or renamed after prominent Kenyans.

This year,  Kapiti Crescent Road in South B was renamed in honour of the late football legend Joe Kadenge.

Mbingu led a protest from Machakos to Nairobi against a colonial policy that required Africans to de-stock cattle, taking away their wealth.

He was gunned down protecting Kenyan territory against Somalis who wanted to take over Northern Kenya, from Isiolo upwards.

Mama Ngina Street was known as Queens Way during the colonial era but was renamed named after Kenya’s first First Lady, the mother of President Uhuru Kenyatta.

Kimathi Street was known as Harding Street but renamed after Field Marshall Dedan Kimathi, as a way of honouring his role in the Mau Mau war.

Ronald Ngala Street was previously known as Duke Street after the British noblemen of the highest hereditary rank.

After Kenya attained Independence, the road was renamed Ronald Ngala, a member of the Kenya African Democratic Union (Kadu), which later merged with Kanu to form government under the first President  Jomo Kenyatta.