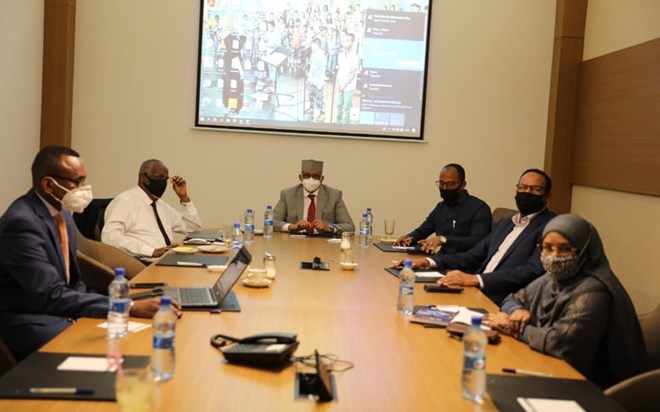 MOGADISHU (HOL)-  Jubbaland and Puntland skipped the second round of technical committee meeting convened by the Federal Government Thursday noting they were not a party to the talks.

Ministers of the two allied states said separately on Twitter that they were not aware of any talks.

“No consultative meeting on Somali elections has yet opened in Mogadishu,” Puntland minister of Interior Mohamed Abdirahman said.

Jubbaland Minister of State in the Office of the President Hirsi Ganni made similar sentiments.
“Jubaland is not part of and is not aware of any meeting that has opened for a technical committee as a prelude to a post-conference meeting,” Ganni said.

The meeting started Thursday morning at Decale Hotel within Aden Adde Airport but the agenda was not immediately clear.

The joint committee of the Federal Government and the Federal Member States announced an electoral deal last month in Baidoa and urged the FGS and FMS leaders to convene and finalise the document.

The electoral talks between President Mohamed Farmaajo which were scheduled to start this week have not commenced despite the arrival of all the FMS leaders in Mogadishu.

UN head in Somalia James Swan said in a radio interview Wednesday evening failure by the country’s leadership to reach a deal had paralysed vital aspects of the country’s governance system.

The UN envoy however said he expected the country’s leadership to set aside their differences for the sake of the country’s future “We hope these political leaders along with others will get down to business and talk seriously about the future of the country.”