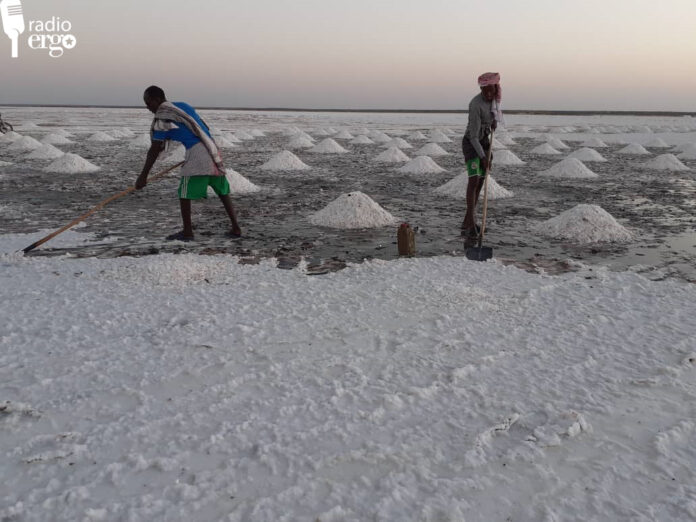 The salt caves, where around 500 men labour to sell salt for a living, have missed being flushed by the last two failed rainy seasons, disrupting the formation of salt for mining.

“I was mining at least 300-350 bags in a month, which helped me pay the family bills when I sold it. But now there is no rain and so the salt is gone,” said Abdulqadir.

He told Radio Ergo that his family of eight had been surviving on one meal a day for the past four months and buying the dry food on credit.

He is one of the few still digging salt residue from the bottom of the caves, but he is only getting about three bags in a week to sell for half a dollar. He used to earn $150 a month.

Abdulqadir came to mine salt in Usbo in 2016 after losing his herd of 125 goats to drought. Around 350 of the salt miners were pastoralists like him, dispossessed by the 2016-17 drought. Some have recently left with their families to Luq district because the caves are dry.

Hassan Gedi Matan came to Usbo in 2017 after losing more than 200 goats and 35 cows. The salt mining sustained him and his family of nine and he had managed to buy 40 goats, hoping to restock his herd.

“We do not have anything to feed our families now. I have been forced to sell the few goats I had bought,” said Hassan.

Radio Ergo’s local reporter met Hassan at Luq livestock market, where he was holding a weak goat that he wanted to sell. He had been back and forth to the market with the goat for three days but was yet to get a buyer.

Hassan said he was left with 25 goats from the 40 he had bought. Seven of them have died since January, and he sold others to buy food for his family.

They have been surviving on dry food taken from the local shops on credit. Hassan said he was planning to move with his family to Luq if the next Gu rainfall failed.

Usbo area commissioner, Mohamed Qasim, told Radio Ergo that more than 1,500 families were living in Usbo area, but nearly 400 families, most of them pastoralists, had moved away since the start of the year.

“The area is experiencing severe water and food shortages,” said the commissioner.  “Salt is like a farm. It depends on water.”