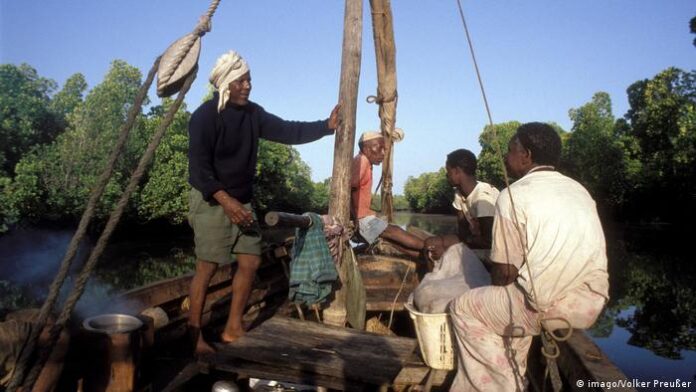 Fishermen go about their day on the Kenyan port of Lamu Island, which lies near the disputed area

The ongoing standoff between Kenya and Somalia over a sizable area of the Indian Ocean has sparked concern among hundreds of thousands of people who depend on the region’s rich fishing grounds for survival.

“We are really worried,” the Kenyan fisherman Adam Lali told DW. “If the border issues are not handled well, they will bring us problems. This will rob us of our fishing areas and will also cause tensions between us and Somali communities.”

The disputed area stretches over 160,580 square kilometers (62,000 square miles). Somalia, which lies northeast of Kenya, wants to extend its maritime frontier with Kenya along the line of the land border, in a southeasterly direction. Kenya, however, wants the border to head out to sea in a straight easterly line, which would give it more maritime territory. As well as being an important fishing ground for both countries, the area is also rich in gas and oil.

Kenya backs out of court hearing

After Somalia first brought the case to the table in 2014, the UN’s International Court of Justice (ICJ) was scheduled to begin the public hearing in The Hague on Monday. The proceedings were expected to run until March 24.

Before proceedings could begin, Kenya’s government announced its intent to withdraw from the case and present its complaints to the UN Security Council, of which it is currently a nonpermanent member.

Based on international maritime law, the court was widely expected to rule in Somalia’s favor.

“Possibly the Kenyans withdrew also because of an expectation that they might just lose,” the political scientist Stig Jarle Hansen, from the Norwegian University of Life Sciences, told DW.

No chance for a dialogue

Some Kenyan observers such as Mustafa Ali, an expert on conflict resolution and national security at the HORN Institute for Strategic Studies, do not believe that the ICJ was the best place to settle the dispute in the first place.

“There are so many alternative mechanisms that could be much more effective and would deliver results,” Ali told DW. “One is the Africa Union border mechanism. The second is direct bilateral negotiations between Kenya and Somalia. Which, in my view, would be the best solution.”

Such dialogue is unlikely to take place anytime soon. Relations between Kenya and Somalia, which are no strangers to border disputes, have become increasingly fractured. Tensions spiked after Somalia’s government severed diplomatic ties with Kenya in December, after accusing Nairobi of meddling in its affairs.

Kenya’s meddling in the spotlight

Decades-old resentments have recently come to the fore, including Kenya’s support for the semiautonomous Somali state of Jubaland.

“There is a large conflict within Somalia between the opposition and President [Mohamed Abdullahi Mohamed] Farmajo,” Hansen said. “And one of the most crucial actors is the Juba state.”

Many international observers agree with the accusations from Somalia’s government. In January, at least nine people were killed in fighting in Jubaland. Somalia blamed the deaths on Kenyan troops and militias backed by Nairobi. Kenya currently has a contingent of almost 3,500 troops in the African Union Mission to Somalia (AMISOM), deployed to fight the terrorist group al Shabaab.

Kenya’s government has denied any wrongdoing, accusing Mogadishu of seeking a scapegoat for domestic problems.

Hansen said there could be some truth to that. “I think there is a greater will now to face off with Kenya to distract from the country’s internal strife,” he said.

Last year’s removal of Somali Prime Minister Hassan Ali Khaire, who was in the middle of successful negotiations with Kenya, fits this hypothesis, he added.

Tensions have also been rising within Somalia, as Farmajo continues ignore calls to step down and hold elections that were originally scheduled for 2020 and later rescheduled for February 2021.

A constitutional crisis is now unfolding in the fragile state. Last Friday, the UN Security Council urged Somalia’s government to organize elections “without delay” in a resolution that stressed the pressure al-Shabaab and armed opposition groups were placing on the country’s already-poor security.

A win for al-Shabab?

The militant group al-Shabab is capitalizing on the situation by focusing its propaganda on attacks against the president. There are also concerns that the resources meant to combat terrorist groups will be redirected toward resolving internal political frustrations.

“We’ve seen that already with the Somali special forces being deployed inside Mogadishu,” Hansen said. “And so there will be much less pressure on al-Shabab, which will give it the possibility of further expansion.”

Hansen said there was the potential for further political turmoil in the wider region, where many conflicts are deeply intertwined.

Ethiopia, where Prime Minister Abiy Ahmed is currently fighting a war in the Tigray region, supports Farmajo’s government and has offered to train his troops. .

Sudan and Egypt are joining forces to oppose Ethiopia’s building of a giant dam along the Nile. There’s also the possibility that Sudan could intervene in Tigray.

“So you have a strange conflict brewing from Cairo in the north to Kenya in the south, which can create a lot of trouble for the world in the near future.