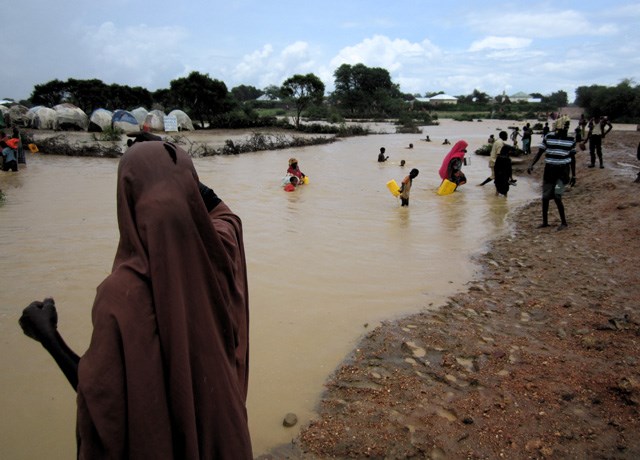 (ERGO) – Willo Mustaf Hassan suffered a miscarriage five months into her last pregnancy when she fell down whilst hauling a 20-litre jerry can of water from the river.

“I haven’t received treatment yet, but I still have to go to fetch water as I don’t have a teenager to help me,” said Willo, 27, who lives in Ajuran internal displacement camp on the outskirts of Beled Hawo in southern Somalia’s Gedo region.

Her miscarriage happened last October and despite experiencing occasional bleeding and not feeling that she had healed, she resumed fetching water from the river Dawa in December.

Water in Ajuran IDP camp used to be accessed by the residents free from taps connected to two storage tanks installed in 2017 by local organisation, Osob.  However, since February 2020 the management controlling the water source have been selling the water at 15 Kenya Shillings per 40 litres. This has forced poor women in the camp to take on the extra burden of long treks to the river for their water needs.

Willo told Radio Ergo’s local reporter that she makes only between one and one and a half dollars a day.

“I can’t afford buying water every morning. The little money I get is not even enough for food,” she said.

She usually makes two trips a day to the river, five kilometres from the camp, carrying 20 litres of water on her back and holding 10 litres by hand.

As she receives no support from her former husband, she has to earn enough to support her children by washing clothes for locals neighbouring the camp. When she has a laundry job, she walks to get water later in the afternoon after work.

On days when she has no laundry jobs, she collects firewood on her way to the river to sell.

Salado Mohamed Bulle, 34, a mother of eight, also lost her baby five months into her pregnancy after falling with a jerrycan full of water late last year. Since then, her eldest daughter, aged 14, has been fetching water for the family. Salado can no longer make the three-hour walk each way from the camp to the river because she finds it too tiring and still feels pain from her accident.

“I have back pains and I bleed a lot, but I can’t afford hospital,” said Salado.

According to the Ajuran camp administration, 37 women in the camp have suffered similar accidents during pregnancy whilst carrying heavy loads of water.

The women’s association in the camp carried out a survey of the 142 women who get their water for domestic use from the river Dawa and found that the arduous walk carrying heavy loads is one of their biggest problems.

Ajuran IDP camp, close to Somalia’s borders with Kenya and Ethiopia, hosts 500 families who fled from drought and conflict between 2015 and 2018. Two-thirds of the families in the camp are too poor to buy water and are relying on water drawn from the river.