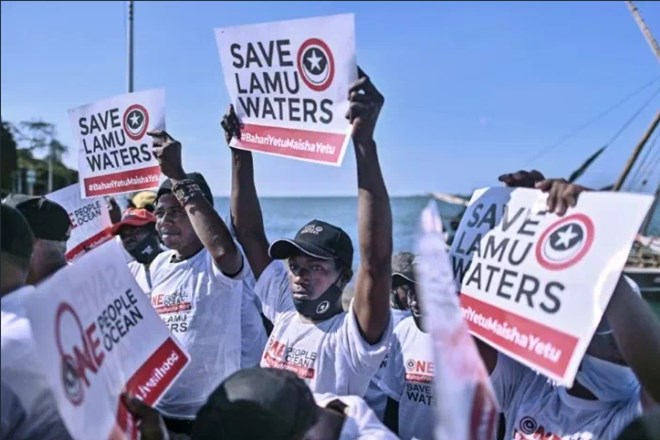 “It is not only about oil and gas”: Kenyan fishermen on Monday protested the feared loss of their livelihoods as an international court pored over a sea border dispute with Somalia.

Hearings into the seven-year-old case brought by Somalia began at the International Court of Justice in The Hague, with Kenya refusing to participate.

Meanwhile about 60 fishermen gathered thousands of miles away on the idyllic Lamu archipelago, hoping to highlight the stakes and begging the court and governments not to forget them.

“The governments are focusing on big interests of oil and gas that can bring government income. But it is not only about oil and gas,” said Adam Lali Kombo, who plies his trade off Kiwayu island.

“We appeal to both governments and the international court to consider the fishermen and their livelihoods”.

The protesting fishermen wore T-shirts and masks with the slogan “Save Lamu Waters”, which also appeared on flags flapping on their traditional dhow sailing boats.

They are worried about losing access to the bountiful waters off the northern town of Kiunga, right by the Somali border.

The maritime zone, currently under Kenyan control, is part of a vast triangle of more than 100,000 square kilometres (40,000 square miles) with rich oil and gas potential, which Somalia says is rightfully its territory.

The ICJ is hearing a case brought by Somalia in 2014.

Somalia, which lies northeast of Kenya, wants to extend its maritime frontier with Kenya along the line of the land border, in a southeasterly direction.

Kenya wants the border to head out to sea in a straight line east, giving it more territory.

After seeking multiple delays, Kenya has refused to take part in the proceedings, but the court ruled they would go ahead regardless.

“It is not too late for both countries, Somali and Kenya, to explore other obvious channels” such as the African Union, other regional bodies, or local elders “who have settled such differences for centuries”, said Is’haq Abubakar, the vice president of the Save Lamu organisation.

“The people of Lamu and our brothers in Somalia have co-existed for a century and continue to consider the current boundaries simply as colonial lines drawn neither for the interests of Kenyan or Somali people.”

“We are not interested in any government winning over another, we appeal for the right to our livelihood and fishing grounds.”

Lamu’s fishermen are already facing dwindling stocks due to overfishing, while the construction of a massive port on their doorstep has devastated some of their fishing areas.

Anxiety over the future has spread through the centuries-old streets of Lamu’s old town, a UNESCO World Heritage Site, where market stalls overflow with the day’s catch.

“Fish from Kiunga, we always get them very cheap, the price is low, because there is plenty of fish from that side. We are able to sell and make money (…) hence we are able to empower ourselves,” said fishmonger Abubakar Afuman.

During the rough rainy season, the fishermen stick near the coast. It is during the calmer dry season that they go deeper out to sea, collecting king mackerel, tuna and swordfish.

“It brings more money, and we are able to save that money,” said Kombo.

“Ninety percent of the people in Lamu county depend on fishing. By any means, we will be the losers,” he added.

“If we lose this territory, we lose 50 percent of our fishing ground.”