For Toronto’s Ahmed Ali, it was never a question of basketball skill and athletic ability in his journey to the NCAA. What drove him to the top was knowing he represented possibility for his Somali-Canadian community.

“There’s one thing I can’t do, is take anything for granted. I know this could be taken away from me in a second. It’s bigger than me. It’s what motivates me,” he says.

Ali didn’t take a traditional path to college ball. There were many times he was discouraged from that reality. From being overlooked in high school, to falling into depression after losing his brother, to being told he’d never play basketball again, crushed dreams and loss have been a constant.

But his ongoing fight, despite all obstacles, led him to be recruited by Washington State in 2018.

“It was like a dream come true for our entire family,” his brother Yusuf Ali said. “We saw him at the NCAA level, playing on the biggest stage. It brought a smile to all of our faces. He’s living out my dream, my family’s dream and every Somali kid’s dream.”

Growing up in an immigrant household as one of 10 siblings in Lawrence Heights — one of Toronto’s toughest neighbourhoods — his mother worked as a personal support worker and his father as a taxi driver, to provide for the large family. 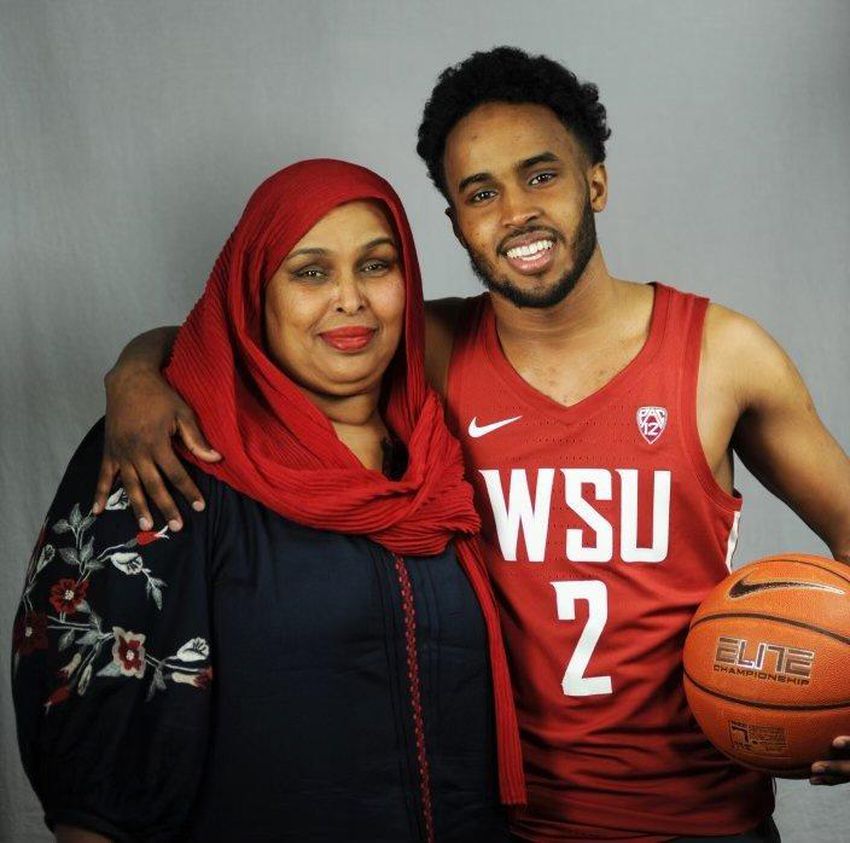 It’s a community that’s often forgotten, and only remembered for poverty, drugs and gun violence, Ali says. For the 24-year-old, it’s the place he calls home, and where he fell in love with the game.

Ali is five-foot-11, a height that’s often overlooked in the basketball world. He went unnoticed by scouts as a high school player and was unranked at one point. No one batted an eye when he put up an impressive 40-plus points against some of the top prospects in the country.

“I remember telling him you are an underdog. Everything that people celebrate you for, you’ve earned,” said Adeel Sahibzada, his former prep coach and now mentor and close family friend. “No one’s giving you a loan, there’s no praise, there’s no expectation.”

With zero college offers almost halfway through his graduating year, Ali kicked it into high gear. In December 2015, he scored a masterful 103 points for his high school team, John Polanyi Collegiate Institute, becoming just the second Canadian basketball player to ever earn 100 points in a high school game. He made headlines across the world.

“If I didn’t score 103, I don’t know what I’d be doing right now. That day really changed my entire basketball career.” Ali said.

Ali’s next goal was to play in the NCAA. First, he’d have to spend two years at the junior college level because of his academic standing. For many athletes, it is their last chance to reach the NCAA. For Ali, those pivotal years were devastating. In the summer of 2017, right after his first season at Eastern Florida State, he lost his brother Said to gun violence back home. Ali wanted to give up on everything.

He was the “glue” that kept him and his family strong and “one of the happiest human beings, who had the power of uplifting anybody in the neighbourhood,” Ali says. Growing up, his brother called him the best point guard in Canada.

Carrying his brother’s spirit helped him get back in the game. “Every single time I’m down in life, I think of him. He’d want me to be positive,” says Ali.

Returning to the court, Ali would be named to the NJCAA Division I all-America second team and crowned the Mid-Florida Conference player of the year, leading his team to a 30-5 record. He also set a school record for career three-pointers. Even hometown hero Drake recognized Ali’s game, donning an Eastern Florida jersey with the number 103 during a performance to show love.

Then, the NCAA schools came calling.

At first, he committed to Kent State, but after a coaching change he decided to transfer to Washington State, where he would start in 24 games. In his first season, he scored in double-figures 10 times while recording a career-high 18 points, seven assists and three steals against USC. He was starting to prove that he belonged on the global stage.

As Ali was preparing to start his second NCAA season in October 2019, he was hit with more bad news. After transferring to the University of Hawaii because of a coaching change, he was told he’d be ineligible to play after a heart issue was discovered during a medical examination. He was also told there was a chance he’d never play basketball again.

Locked in his dorm room, Ali struggled to pick up the phone to tell his family. “It was one of the saddest days for me,” he says.

Returning home, Ali spent eight months undergoing MRIs and ultrasounds. Doctors wanted to see how his heart would react if he didn’t play. He spent those months with family and close friends, watching Hawaii’s games and wondering what could have been.

Then, COVID-19 hit. Sports stopped across the globe. It was in this time of silence and patience that Ali’s heart aligned with his passion.

By late May, he was given clearance to play again. Immediately, he got back to the gym three times a day and went out for runs to get back into shape. In July, he was ready and committed to the University of Portland under head coach and former NBA all-star Terry Porter.

Ali showed out this season, especially in a standout overtime win over one of the team’s fiercest rivals, Oregon State. He dropped 26 points, six rebounds, four assists and the game-winning shot, putting the college world on notice.

“That whole game I was telling myself in my head: We have to win. I had to prove that I can play at this level,” Ali said. “Nobody could tell me what I can and can’t do.”

This season, Ali retains his title as one of the best Canadian basketball players in the NCAA. He finished second among Canadian players in points (averaging 18.2) to go with 3.1 assists, 2.8 rebounds, 36.6 per cent shooting from deep and 46.3 per cent from the field.

In his final game of the season, Ali and Portland came up short in the West Coast Conference tournament against Santa Clara University. Despite that, he earned an all-West Coast Conference honourable mention and will have the option to return to the NCAA for another season, or look at options to play professionally.

Many of the trials and tribulations that Ali has dealt with could have stopped him, but instead keep pushing him to be better. Now, in his time off, he’s pitching in at the Toronto Basketball Academy, coached by older brother Yusuf, to help the next generation of talent looking to follow in his footsteps.

“(Hopefully) I can help all the kids growing up if they want to pursue (basketball). And for the Somali community, I want them to know anything is possible in this life.”

Libaan Osman is a Toronto-based digital producer on the Star’s audience desk. Reach him via email: losman@thestar.ca