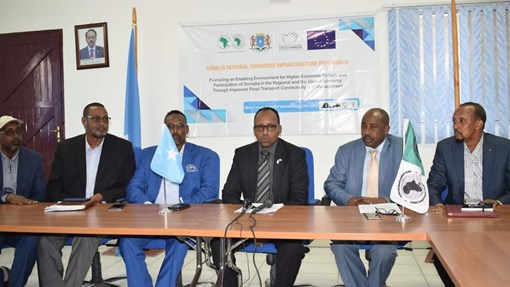 MOGADISHU (HOL) – Delays in negotiations between the European Union and the African Development Bank have hindered a EUR 42 million road construction project in Somalia approved in 2019.

The European Union Delegation in Somalia and the Ministry of Planning said in a joint statement talks with the African Development Bank which is supposed to implement the project had delayed construction works under the Somalia Regional Corridors Infrastructure Programme (SRCIP).

“There have been delays to the process due to ongoing negotiations between the EU and the AfDB regarding the overall framework arrangement,” the statement read in part. It however noted the delays are not limited to Somalia but across Africa.

The EU and Somalia signed the SRCIP deal in June 2019. The contract involves the rehabilitation and construction Beled Weyne – Galkayo covering 327 km, Galkayo – Garowe (240km) and Galkayo – Hobyo which stretches for 241km.

The second part of the project-Jalam-Harfo Road Rehabilitation Project billed at EUR 6 million and signed in December 2019 is ongoing under the implementation of the United Nations Office for Project Services (UNOPS). This is part of the Gaalkacyo – Garowe Road Project.

“UNOPS has begun the implementation process of this road, and the process is fully on course. So far, the feasibility study has been concluded and material testing has been conducted,” the joint statement added.