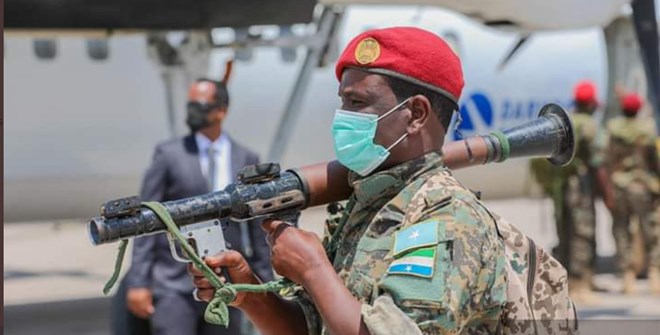 The elite forces armed with guns and Rocket Propelled Grenades (RPGs) arrived at Aden Adde Airport in a show of military might by the Puntland leader who has been at loggerheads with President Mohamed Farmaajo.

Deni’s close ally, Ahmed Madobe of Jubbaland also landed in Mogadishu last Wednesday in a similar style reinforcing their suspicions with Farmaajo whom they have differed sharply in recent months on how the elections will be held.

Madobe has been staying within the airport area and is expected to be joined by Deni. Both leaders, alongside the Council of Presidential Candidates (CPC), have called on Farmaajo to resign and participate in the talks as a candidate.

The talks, which will be on the sixth round have failed to yield a concrete agreement to allow the country head for elections.

The CPC and other opposition politicians have called for the talks to be expanded to allow for their participation and the civil society but the Federal Government has stood ground that the September 17 agreement is no longer subject to reopening.