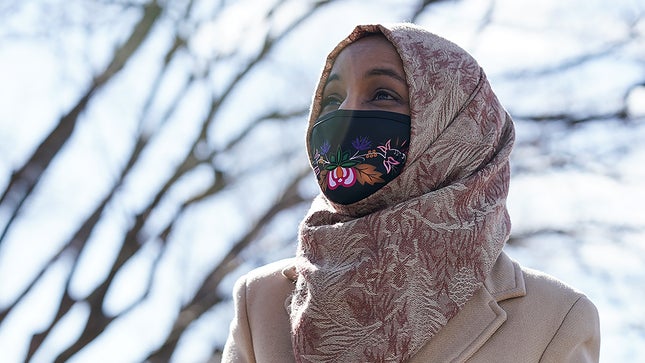 Some Democrats in Congress want to sanction Saudi Arabia’s crown prince. The Biden administration says Mohammed bin Salman ordered the murder of a Saudi-born journalist, Jamal Khashoggi. They’ve imposed sanctions against people involved in the attack but apparently not on the crown prince. Minnesota Representative Ilhan Omar wants to change that. She talked with Steve Inskeep.

Omar’s proposal would ban Mohammed bin Salman from visiting the United States, which he toured in 2018. It would also freeze U.S.-based assets of one of the world’s wealthier people.

ILHAN OMAR: It’s important for us to remember that every minute Mohammed bin Salman escapes punishment is a moment where the United States’ interests, human rights, and the lives of Saudi dissidents are at risk.

INSKEEP: Ilhan Omar sees the issue in personal terms. Long before her election to Congress, she was herself a refugee from Somalia. And our talk on Mideast politics began with the message she thinks the United States is sending by appearing to leave the crown prince out of the sanctions.

OMAR: You can sort of get away with murder. And that’s not the message that we should be sending if we are to be seen as a country that values having no one be above the law.

INSKEEP: The State Department says that they have taken action to impose visa restrictions – I guess they can’t go into the United States – on 76 Saudi individuals. Is that not enough?

OMAR: It is not. We don’t only punish those who actually participate in the murder. We also punish those who call for murders who pay for murders. And it doesn’t serve us well to say, here is the evidence that Mohammed bin Salman ordered the murder of Jamal Khashoggi. But we are not going to do anything with him. We’re going to do everything to the people he ordered to murder Khashoggi.

INSKEEP: Has the United States, broadly speaking, been a force for good in the Middle East in recent years?

OMAR: That’s a very loaded question (laughter). So many countries in the Middle East are in disarray. Whether it is our inability to solve and address the need of Palestinians to have a sovereign nation, addressing the continued war and assaults on Yemenis, there are, really, no successes, even in Iraq, for us to celebrate. To me, as someone who’s survived a civil war, who knows the pain of living in a refugee camp and fleeing conflict, I am constantly pained by the struggles people are going through. And it is incumbent, I think, for us to think about what it means to actually be a force for good and bringing about a safe and prosperous Middle East.

INSKEEP: Is the United States today in a good position to promote democracy and human rights in other countries?

OMAR: We are always in a good place to promote democracy. I think the world is always looking to us. And we’ve not oftentimes been in the best shape to do that. And, you know, what’s happening with our democracy right now might be an example of that. But I think, as a nation, we should be always trying to do right by our country and around the world.

INSKEEP: I want to note, Representative Omar, we have reached you just after you were on the floor of the House of Representatives casting an important vote on the COVID relief bill. You were voting on that same floor with lawmakers who voted to object to the presidential election January 6. I’m curious, what is your working relationship like with the 140 or so – close to 140 – who voted to object?

OMAR: It’s a fractured relationship. There is a lot of mistrust among lawmakers, you know, a lot of conversations about even voting for bills that are sponsored by those that objected to a functioning democracy. You know, it’s really hard being there.

INSKEEP: Do you see a colleague on the floor who voted to object and that’s the first thing that comes into your mind about them?

OMAR: Yeah. I mean, people now – it’s sort of like January 6 has left a dark cloud. And I just don’t think a lot of us are interested in moving forward and forgetting because we know that political violence and rhetoric that leads to political violence does not disappear. It’s something that has to be addressed.

INSKEEP: Representative Ilhan Omar of Minnesota. Thanks so much.

OMAR: Yeah. Thank you for having me.Copyright 2021 NPR. To see more, visit https://www.npr.org.