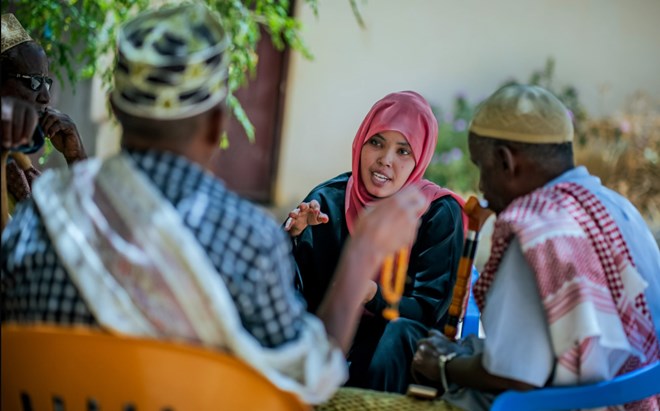 Everyone is impressed by Khowla Mohamed Abdow. She’s competent, helpful and hardworking. At 25 years old, she’s the coordinator of Baidoa’s Alternative Dispute Resolution Centre in South West Somalia, a Ministry of Justice facility supported by UNDP, where local people can come for help solving arguments ranging from land theft to domestic abuse. The centre offers a safe place where opposing parties can either talk things through — sometimes de-escalating situations that could turn into serious violence — or put their disputes before a panel of male and female elders for an independent decision.

Coordinating all this is big responsibility for someone not long out of university, but Khowla is used to major challenges.4

Born in Baidoa, she moved to Kenya as a young child to escape civil war. “I don’t remember the details,” she says. “But my parents told me they just wanted us children to have a good education.”

The family settled in Mandera, a border town at the meeting point of Kenya, Ethiopia and Somalia. And the move paid off. After high school Khowla went on to Mt Kenya University in Nairobi to study Public Administration.

Even at 18, she knew society could be better and she wanted to play a part in improving it.

“I used to hear from my mum and dad, and also from the radio, about how women were mistreated and how they were forced to get married,” she says. “And I was inspired by a quote from Audre Lorde:

“I am not free when any other women is unfree, even when her shackles are very different from mine.”

In 2018, Khowla returned to Somalia and found a job with the Danish Refugee Council as a case worker. She started visiting internally displaced persons (IDP) camps to help fill out refugee applications and also helped abused women get medical care.

Statistics are hard to come by in Somalia, but globally one in three women experience domestic violence and NGOs report that local cases have increased during the pandemic. At the same time, there is little support and fewer than one in ten police officers is a woman. 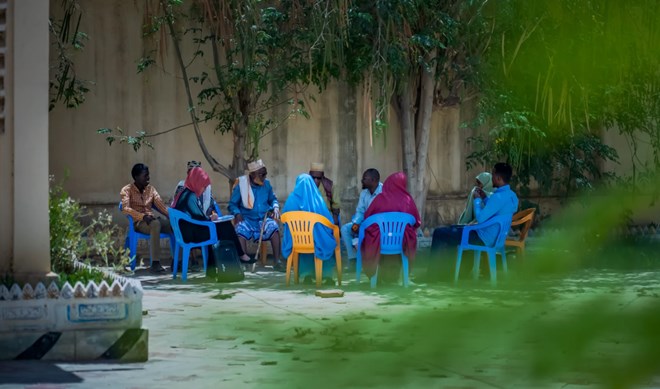 “The most hurtful thing is that when the elders found out that she was married, they didn’t take it seriously. They didn’t give her the same rights as a they would have given an unmarried girl. So in the end, the rapist’s family just paid some money to the woman’s family and that was it.

“When the woman told me the story, she said ‘I have nothing to say because my family are OK with it and my husband didn’t care — all they wanted was the compensation money.’

“I felt very bad about this. Really traumatized. It was hard for me to believe it at first. But now I’ve come across many women who have experienced this kind of violence.”

At the dispute resolution centre, many of the cases involve violence against women. “Rape happens a lot in our community,” Khowla says. “We are still trying to find a solution to this problem and it’s the same with domestic violence, especially now that cases have gone up since COVID-19. It makes me quite depressed sometimes. Why are women being treated this way?

“There are cultural norms that say a man is always right and he can even beat women — and women believe this. I think it is partly because they lack education and so they don’t know their own rights. Families tell women to get married early, so they drop out of school, but if a woman has education, she won’t allow a man to abuse her or neglect her. Like for me, I would never put up with abuse, I would just leave.

“The elders didn’t have this kind of education or training before, but most of them agree with it and it doesn’t only have an effect in the centre, it causes an immediate change in households. Elders have told me that they’ve started speaking more to their children — asking them about their homework and so on — and to their wives, whereas previously they would mostly ignore them.”

Khowla is a lesson for the community an example of what women can achieve in managerial positions. The centre she manages is known throughout Southwest State thanks to radio awareness programmes and outreach with displacement camps. But her influence stretches further than that. As a trainer in non-violent communications, she has taught people from Puntland and Somaliland so that they can bring the same dispute-resolution techniques to their own communities.

“It’s not that common to have a woman in charge of something like this,” says Khowla. “Mostly women are interns or something like that. I am very happy because I wanted to serve the community and now I have achieved that dream, but I also feel that I can make it easier for women to get jobs higher up. And I have created a conducive environment for women to come and work, and for the women elders to fit in.” 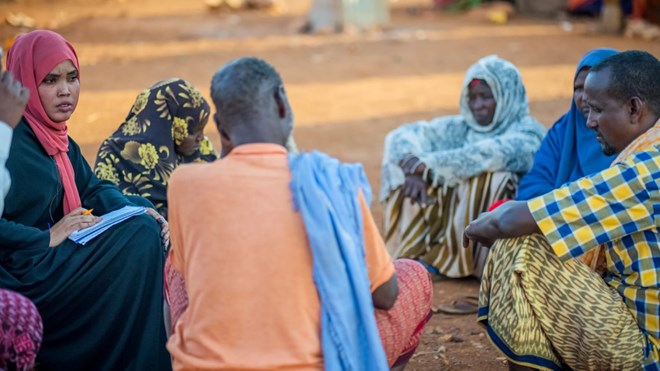 Khowla is proud of these achievements, but argues that larger, structural changes are needed if women are to be free from exploitation.

“We need a system that provides support for women’s rights, advocacy and empowerment,” she says. “We need to change the culture and to educate the elders who have the power to resolve these cases. We need to give women job opportunities to make them more independent, because most family disputes are due to husbands not providing school fees and households costs.

“It would help to have more women MPs and for them to be the directors general of the ministries. You won’t find a single female Director General in Southwest State. That’s one thing that made we wonder why we are not valuing women. There aren’t even that many working as normal staff. Even at the Ministry of Women, the Director General is a man!”

As well as the discrimination, there are huge disincentives for women to take on these roles. Khowla’s job at the centre, and her standpoint on women’s rights make her a target.

“Is the work I do is dangerous? Yes,” she agrees. “But I take the challenge for the betterment of my society. The dangers are that you may be helping to resolve a case with the elders and one side does not agree with the result and that can make that person search for our phone number and call to threaten us. It happens sometimes. They threaten to kill me and say things like you made my wife think that I am nothing in front of her.”

For Khowla the mission is worth the risk. And when she’s under pressure, she thinks back on the words of feminist poet who inspired her.

“I am not free while any woman is unfree, even when her shackles are very different from my own.” — Audre Lorde.