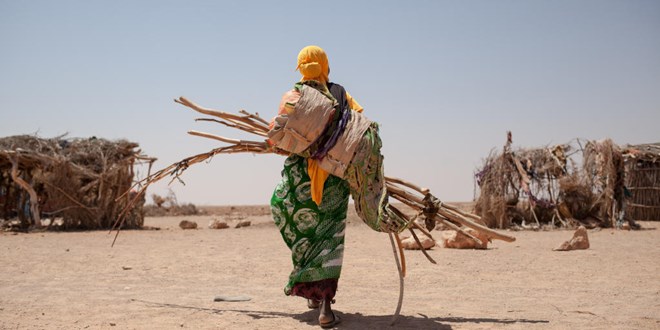 Fadumo Mohamed Awale, a mother of six, has been going out every day begging from the local residents in Balli-lasole village in central Somalia’s Abudwak district, hoping to get enough to scrape together a family meal.

When they fled an upsurge in clan militia fighting in Hananbure on 25 February, they grabbed what they could and walked to Balli-lasole as they could not find a vehicle to transport them.

“I cook whatever I get in the evening for the children. We left all our utensils behind except a kettle, two plates and four cups,” said Fadumo, who has been sleeping rough under a tree with her children.

This distressed family joined 10 other families to raise seven dollars to buy a barrel of water that lasted two days. The water, which is salty, is fetched from Bowda-dhogorre and they buy it when they can.

Before the conflict, Fadumo used to earn $5.5 a day from the sale of milk from her 10 milking goats and 40 eggs from her chickens. With the extra from her husband’s jobs on construction sites they used to manage the bills.

Now, however, she feels desperate. Her husband is fighting with one of the clan militias.

“I have only four goats left. Fifteen including five kids were killed in the conflict. I found some of the goats’ carcasses with bullet wounds after searching for them for a month. I also lost 150 chickens, some were shot and the rest were eaten by predators,” she said.

Hawo Mohamud Osoble, a mother of nine, walked for three hours with her children to Olol, 24 kilometres from Hananbure.

“I took my goats for water at 1 pm on a sunny afternoon. A group of men were attacked and killed near the well. I went home and left immediately with my children. We didn’t take anything, not even my goats,” she explained.

Hawo had been earning a living of $5-$8 a day selling tea at her 12-year old tea shop in Hananbure. After fleeing their two-roomed house they are now sleeping rough under a tree.

Some neighbours helped her with a kettle, a pot and two cups, which are her only utensils. She hopes to restart her tea business when they are able to return home to Hananbure.

Aden Abdulle Osman, an elder from Hananbure, told Radio Ergo’s local reporter by phone from Balli-Laasole that the essential businesses in Hananbure had all shut down. Two schools in the area closed because all 874 students enrolled have fled with their families.

Traditional elders and officials from the Somali government and the Galmudug administration have been talking to the warring sides to find a solution to the conflict. A temporary ceasefire has been agreed but there is no peace settlement yet.