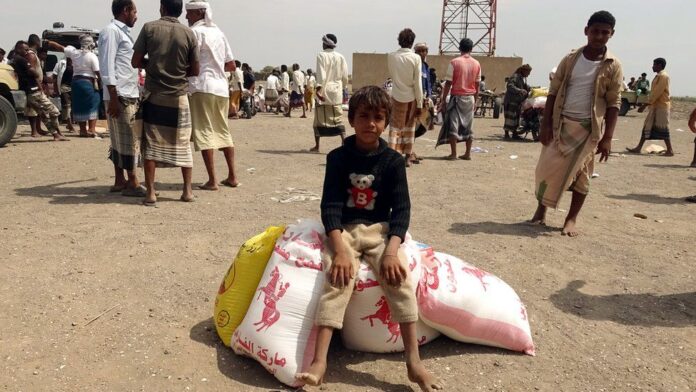 A Foreign Office spokesman said the government remained “steadfast” in its support to the Yemeni people.

Yemen is among several Middle Eastern and African countries whose UK aid is at risk, a leaked email suggests.

First reported by openDemocracy, a leaked document dated last month suggests officials are considering cutting aid to Syria by 67% and Lebanon by 88%.

In a letter to Boris Johnson, charities say the government has made a “misjudgement” by thinking the public is happy to turn away from countries affected by poverty, war and disease.

“History will not judge this nation kindly if the government chooses to step away from the people in Yemen and thus destroy the UK’s global reputation as a country that steps up to help those most in need,” the letter says.

Oxfam, Christian Aid, Save the Children and Care International are among the 101 signatories.

Danny Sriskandarajah, Oxfam GB chief executive, said: “Aid cuts are a false economy that will remove a vital lifeline from millions of people in Yemen and beyond who can’t feed their families, have lost their homes and whose lives are threatened by conflict and Covid.”

He also urged the government to stop the “immoral” practice of selling arms to the war-torn state.

The government wants to reduce its overall international aid budget by about £4bn in 2021-2022, which will mean missing the UN target of spending 0.7% of national income on foreign aid.

But it has yet to say where the axe will fall.

The leaked Foreign Office email gives the first indication of which countries might lose out.

Kevin Watkins, chief executive of Save the Children, said the UK’s decision to cut aid would have “devastating real-life consequences”.

MPs from across the political spectrum have criticised the reduction in aid.

The decade-long conflict in Yemen has left an estimated 20 million people – two-thirds of the population – dependent on humanitarian assistance while two million children are acutely malnourished.

In Syria, the country has been left devastated by a conflict that erupted after President Bashar al-Assad’s government responded with deadly force to peaceful anti-government protests in March 2011.

The fighting has left at least 380,000 people dead and caused half the population to flee their homes, including almost six million refugees abroad.

A UK government spokesman said: “The seismic impact of the pandemic on the UK economy has forced us to take tough but necessary decisions, including temporarily reducing the overall amount we spend on aid.

“We are still working through what this means for individual programmes and decisions have not yet been made.

“We remain a world-leading aid donor and we will spend more than £10 billion this year to fight poverty, tackle climate change and improve global health.”