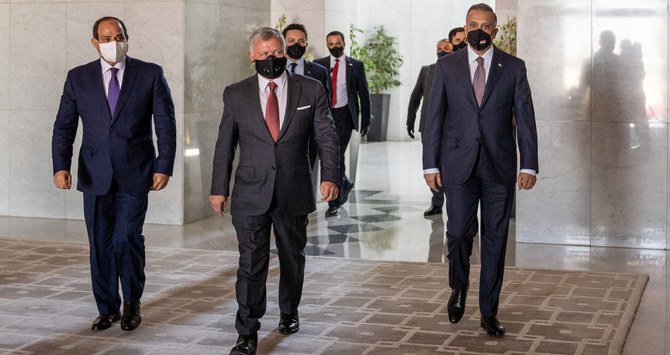 CAIRO: A land route for passengers linking Egypt, Jordan and Iraq will improve transport options for workers and students, according to Cairo and Amman.

Kamel El-Wazir, Egyptian minister of transport, and Amjad Adaileh, Jordan’s ambassador in Cairo, said that the land transport link between the three countries — starting from Cairo and continuing through Amman to Baghdad — will cost $130 per passenger, including the ferry price between the ports of Nuweiba and Aqaba.

During a meeting in Cairo, they discussed ways to support trade between Egypt and Jordan by overcoming hurdles faced at arrival ports, and facilitating the transfer of Egyptian products to Jordan and from there to other Arab countries such as Iraq and Syria.

They also discussed the need to develop the Arab Bridge Maritime Company owned by Egypt, Jordan and Iraq, and open markets to serve the trade movement between the three nations and East African countries.

Reservations in Egypt can be made through the Arab Union Superjet Company.