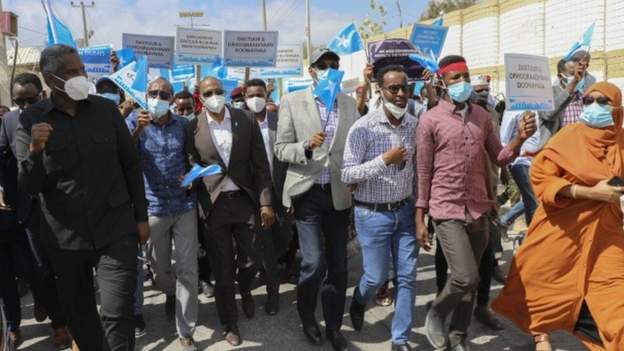 Somali opposition presidential candidates have agreed to postpone anti-government protests that were scheduled for Friday in the capital, Mogadishu.

This follows a meeting with Prime Minister Mohamed Hussein Roble where the federal government apologised for last week’s crackdown on protesters.

The postponed demonstration will take place within 10 days, according to a statement.

The government guaranteed to uphold the right of citizens to organise and participate in peaceful demonstrations.

The leaders in the meeting also agreed to continue with talks to unlock a stalemate on how to proceed with elections.

The first term of President Mohamed Abdullahi Mohamed, also known as “Farmajo”, ended on 8 February without the election of a successor – throwing the country into a crisis.

The elections have been delayed because of regional squabbles over how power is distributed – and a row over a new election commission.

Analysts say there is concern that the political wrangling could split the security forces along clan lines at a time when they are fighting al-Shabab Islamist militants, who control vast areas of central and southern Somalia.

The UN mission in Somalia has welcomed Thursday’s agreement.