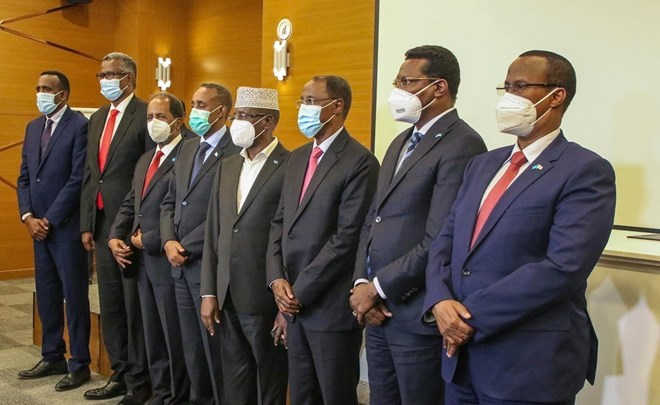 MOGADISHU (HOL) – Somali Prime Minister Mohamed Roble is this afternoon meeting opposition leaders for the second round of talks aimed at unlocking the electoral gridlock that has persisted for several months now.

Government spokesman Mohamed Moalimuu confirmed the meeting noting the government was ‘ready to talk with ‘different view for the interest of our country and go to polls.’

The meeting is the second following the initial one last week. The Council of Presidential Candidates (CPC) which brings together 15 presidential candidates met with Roble on February 25.

During the meeting last week, the two sides agreed to the delay of opposition protests for ten days and that the Federal Government will solely provide security.

PM Roble also apologized for use of live bullets by security forces against opposition protesters on February 19.

President Mohamed Farmaajo has been at loggerheads with the opposition and a section of Federal Member State leaders over the modalities of the long over due presidential and parliamentary elections.

The opposition demanded last week Farmaajo resigns and hands over power to a transitional body and also called for the removal of the heads of the military, police and intelligence over their role in the February 19 incident.

Today’s meeting is expected to move closer towards a deal which would pave way for elections.