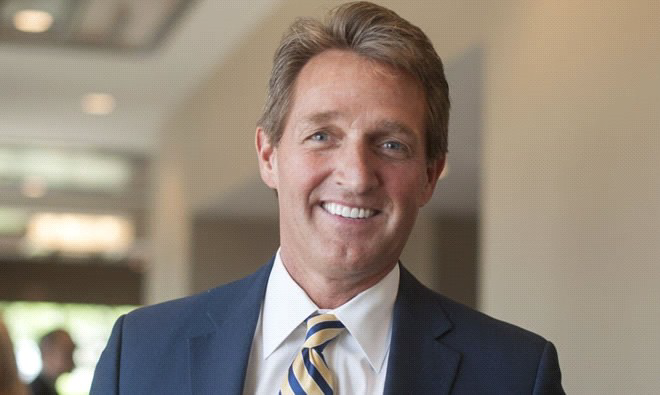 To my former Senate Re-publican colleagues,
I don’t envy you.
It might not be fair, but none of the successes, achievements and triumphs you’ve had in public office — whatever bills you’ve passed, hearings you’ve chaired, constituents you have had the privilege of helping — will matter more than your actions in the coming months.
President Trump is on trial. But in a very real sense, so are you. And so is the political party to which we belong. As we approach the time when you do your constitutional duty and weigh the evi-dence arrayed against the president, I urge you to remember who we are when we are at our best. And I ask you to remem-ber yourself at your most idealistic.
We are conservatives. The political impulses that compelled us all to enter public life were defined by sturdy pillars anchored deep in the American story. Chief among these is a realistic view of power and of human nature, and a corresponding and healthy mistrust of concentrated and impervious executive power. Mindful of the base human instincts that we all possess, the founders of our constitutional system designed its very architec-ture to curb excesses of power.
Those curbs are espe-cially important when the power is wielded by a president who denies real-ity itself and calls his be-havior not what it is, but “perfect.”
Personally, I have never met anyone whose behav-ior can be described as perfect, but so often has the president repeated this obvious untruth that it has become a form of dogma in our party. And sure enough, as dogma de-mands, there are members of our party denying ob-jective reality by repeating the line that “the president did nothing wrong.” My colleagues, the danger of an untruthful president is compounded when an equal branch follows that president off the cliff, into the abyss of unreality and untruth.
Call it the founders’ blind spot: They simply could not have envisioned the Article I branch abet-ting and enabling such dangerous behavior in the Article II branch. And when we are complicit, we cede our constitutional responsibilities, we forever redefine the relationship between Congress and the White House, and we set the most dangerous of precedents.
My simple test for all of us: What if President Barack Obama had en-gaged in precisely the same behavior? I know the answer to that question with certainty, and so do you. You would have un-derstood with striking clar-ity the threat it posed, and you would have known exactly what to do.
Regarding the articles of impeachment, you could reasonably conclude that the president’s actions warrant his removal. You might also determine that the president’s actions do not rise to the constitu-tional standard required for removal. There is no small amount of moral hazard with each option, but both positions can be defended.
But what is indefensible is echoing House Republi-cans who say that the president has not done anything wrong. He has.
The willingness of House Republicans to bend to the president’s will by attempting to shift blame with the promotion of bizarre and debunked conspiracy theories has been an appalling specta-cle. It will have long-term ramifications for the coun-try and the party, to say nothing of individual repu-tations.
Nearly all of you con-demned the president’s behavior during the 2016 campaign. Nearly all of you refused to campaign with him. You knew then that doing so would be wrong — would be a stain on your reputation and the standing of the Republican Party, and would do last-ing damage to the conser-vative cause.
Ask yourself today: Has the president changed his behavior? Has he grown in office? Has the mantle of the presidency altered his conduct? The answer is obvious. In fact, if the president’s political rally in Michigan on Wednes-day is any measure, his language has only become more vulgar, his perform-ance cruder, his behavior more boorish and unstable.
Next, ask yourself: If the president’s conduct hasn’t changed, has mine? Before President Trump came on the scene, would I have stood at a rally and cheered while supporters shouted “lock her up” or “send them back”? Would I have laughed along while the president demeaned and ridiculed my col-leagues? Would I have ever thought to warm up the crowd for the president by saying of the House speaker: “It must suck to be that dumb”?
As I said above, I don’t envy you. You’re on a big stage now. Please don’t accept an alternate reality that would have us believe in things that obviously are not true, in the service of executive behavior that we never would have encour-aged and a theory of ex-ecutive power that we have always found abhor-rent.
If there ever was a time to put country over party, it is now. And by putting country over party, you might just save the Grand Old Party before it’s too late. ■
Jeff Flake, a Republican, represented Arizona in the U.S. Senate from 2013 to 2019. He is a resident fel-low at Harvard University and a contributor to CBS News.
This article was originally published in Washington Post

In the US, Hindus and Muslims prefer to watch CNN, while white evangelicals like Fox News