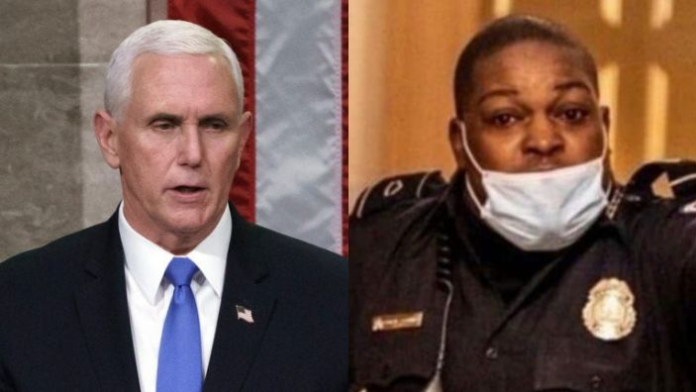 The officer who may have saved the life of Vice President Mike Pence could now be giving him the side-eye.

The cop hailed as a hero for leading a crowd of insurrectionists away from the Senate floor and potentially saving hundreds of lawmakers’ lives has, perhaps, left the vice president on read.

Vice President Mike Pence has reportedly reached out to thank Capitol Police Officer Eugene Goodman for his heroism on Jan. 6, but they have yet to connect.

A person close to the vice president, who will be leaving office on Wednesday, said Pence is “hopeful” the two will connect during his final attempts today.

Goodman was chased by a mob of pro-President Donald Trump rioters, and video footage shows him baiting a single man in front by pushing him in the chest. That man — Doug Jensen, who has since been arrested and charged in Iowa — and those behind him followed Goodman up another flight of stairs away from the unguarded door to the Senate chambers.

Read More: Woman who entered Capitol may have stolen Pelosi device to sell to Russians: FBI

Moments earlier, Pence had been at its podium certifying the results of the 2020 presidential election.

Pence was rushed out before the insurrectionists entered, and several members of his family were also present for the Capitol chaos. According to numerous reports, Trump never reached out to inquire about their safety.

As previously reported, Goodman’s bravery during the insurrection may result in him being honored with the Congressional Gold Medal. A bipartisan group of congressional members introduced a resolution on Thursday, nearly a week after the U.S. Capitol was breached, to recognize Goodman.

“By putting his own life on the line and successfully, single-handedly leading insurrectionists away from the floor of the Senate Chamber, Officer Eugene Goodman performed his duty to protect Congress with distinction, and by his actions, Officer Goodman left an indelible mark on American history,” the House resolution reads.

Additionally, a U.S. expatriate, Renée Jacobs, has offered Goodman a free stay at her bed and breakfast in the south of France.

Since the Jan. 6 insurrection, Pence has been more present in public performing the functions of a commander-in-chief. He recently visited National Guard members, who are securing the Capitol Building from additional security threats in a district thick with protective military presence and anxious, hopeful residents.