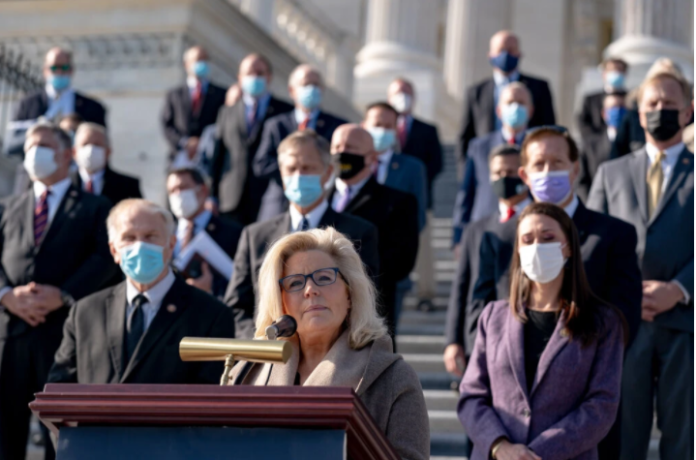 G.O.P. leadership would like to blunt President Trump’s influence over the party. Mr. Trump and his allies want to punish those who have crossed him. A series of clashes looms. 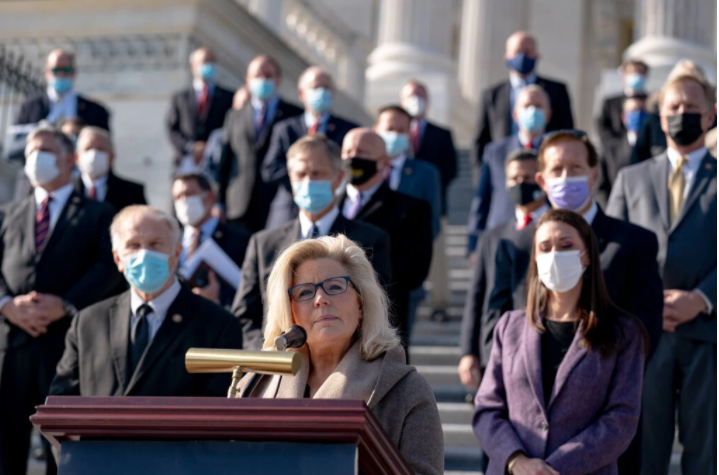 Representative Liz Cheney, the third-ranking House Republican, voted to impeach President Trump this week and has since faced calls for her removal from her leadership role.Credit…Anna Moneymaker for The New York Times

As President Trump prepares to leave office with his party in disarray, Republican leaders including Senator Mitch McConnell are maneuvering to thwart his grip on the G.O.P. in future elections, while forces aligned with Mr. Trump are looking to punish Republican lawmakers and governors who have broken with him.

The bitter infighting underscores the deep divisions Mr. Trump has created in the G.O.P. and all but ensures that the next campaign will represent a pivotal test of the party’s direction, with a series of clashes looming in the months ahead.

The friction is already escalating in several key swing states in the aftermath of Mr. Trump’s incitement of the mob that attacked the Capitol last week. They include Arizona, where Trump-aligned activists are seeking to censure the Republican governor they deem insufficiently loyal to the president, and Georgia, where a hard-right faction wants to defeat the current governor in a primary election.

In Washington, Republicans are particularly concerned about a handful of extreme-right House members who could run for Senate in swing states, potentially tarnishing the party in some of the most politically important areas of the country. Mr. McConnell’s political lieutenants envision a large-scale campaign to block such candidates from winning primaries in crucial states.

But Mr. Trump’s political cohort appears no less determined, and his allies in the states have been laying the groundwork to take on Republican officials who voted to impeach Mr. Trump — or who merely acknowledged the plain reality that Joseph R. Biden Jr. had won the presidential race.

Republicans on both sides of the conflict are acknowledging openly that they are headed for a showdown.

“Hell yes we are,” said Representative Adam Kinzinger of Illinois, one of the 10 House Republicans who voted to impeach Mr. Trump.

Mr. Kinzinger was equally blunt when asked how he and other anti-Trump Republicans could dilute the president’s clout in primaries: “We beat him,” he said.

The highest-profile tests of Mr. Trump’s clout may come in two sparsely populated Western states, South Dakota and Wyoming, where the president has targeted a pair of G.O.P. leaders: John Thune, the second-ranking Senate Republican, and Liz Cheney, the third-ranking House Republican.

“I suspect we will see a lot of that activity in the next couple of years out there for some of our members, myself included,” said Mr. Thune, adding that he and others would have to “play the hand you’re dealt.”

He may face less political peril than Ms. Cheney, who in voting to impeach Mr. Trump said that “there has never been a greater betrayal by a president.” The Wyoming Republican Party said it had been inundated with calls and messages from voters fuming about her decision.

Mr. Trump has talked to advisers about his contempt for Ms. Cheney in the days since the vote and expressed his glee about the backlash she is enduring in her home state.

Privately, Republican officials are concerned about possible campaigns for higher office by some of the high-profile backbenchers in the House who have railed against the election results and propagated fringe conspiracy theories. Among those figures are Representatives Marjorie Taylor Greene of Georgia, Lauren Boebert of Colorado and Andy Biggs of Arizona. All three states have Senate seats and governorships up for election in 2022.

Just as striking, a number of mainline conservatives in the House are speaking openly about how much Mr. Trump damaged himself in the aftermath of the election, culminating with his role in inspiring the riots.

“The day after the election, that question of leadership was unquestionably in one person’s hands, and each week that has gone past, he has limited himself, sadly, based off his own actions,” said Representative Patrick McHenry of North Carolina, who predicted that rank-and-file voters would come to share his unease after they fully absorbed the Capitol riot.

Still, Mr. Trump has vowed a campaign of political retribution against lawmakers who have crossed him — a number that has grown with the impeachment vote. The president remains hugely popular with the party’s grass roots and is most likely capable of raising enough money to be a disruptive force in 2022. 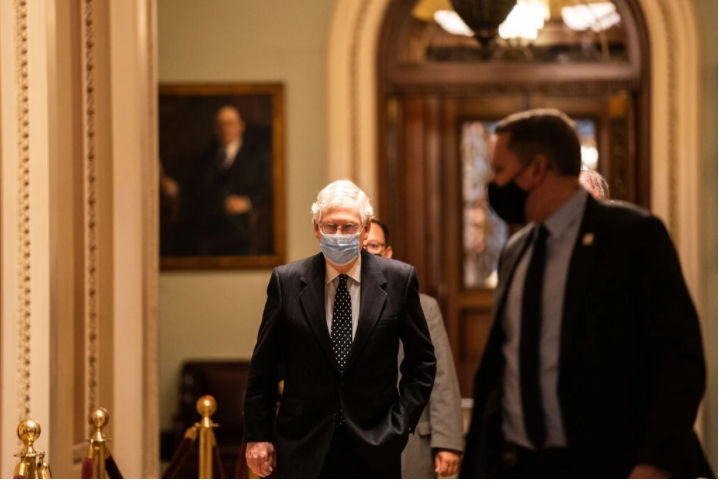 Mitch McConnell, the Senate Republican leader, is said to be determined to thwart Mr. Trump’s influence in the next elections.Credit…Anna Moneymaker for The New York Times

Scott Reed, the former chief political strategist for the Chamber of Commerce, a powerful business lobby, said that Republicans should prepare for a ferocious internecine battle. Mr. Reed, who as an ally of Mr. McConnell’s helped crush right-wing populists in past elections, said the party establishment would have to exploit divisions within Mr. Trump’s faction to guide its favored candidates into power.

“In 2022, we’ll be faced with the Trump pitchfork crowd, and there will need to be an effort to beat them back,” Mr. Reed said. “Hopefully they’ll create multicandidate races where their influence will be diluted.”

An early test for the party is expected in the coming days, with Trump loyalists attempting to strip Ms. Cheney of her House leadership role. Should that effort prove successful, it could further indicate to voters and donors that the party’s militant wing is in control — a potentially alarming signal to more traditional Republicans in the business community.

Kevin McCarthy, the House minority leader, has acknowledged to political donors in recent days that the departing president and some members of his faction have seriously damaged the party’s relationship with big business, people familiar with his conversations said.

If Ms. Cheney is deposed, it could encourage primary challenges against other Republicans who supported impeachment or censure, including more moderate lawmakers like Representatives Peter Meijer and Fred Upton of Michigan and John Katko of New York, whose districts could slip away from Republicans if they nominated hard-line Trump loyalists. But in a sign that Mr. Trump can’t expect to fully dictate party affairs, Mr. McCarthy has indicated that he opposes calls to remove her from leadership.

William E. Oberndorf, an influential Republican donor who gave $2.5 million to Mr. McConnell’s super PAC, the Senate Leadership Fund, in the 2020 election, said that donors should be closely watching the impeachment votes as they formulate their plans for giving. A longtime critic of Mr. Trump, Mr. Oberndorf said it had been a mistake for the party not to oust Mr. Trump during his first impeachment trial last year.

“They now have a chance to address this egregious mistake and make sure Donald Trump will never be able to run for public office again,” Mr. Oberndorf said. “Republican donors should be paying attention to how our elected officials vote on this matter.”

It is not yet clear how widely the party leadership might embrace a no-new-Trumps strategy, and there are strong indications that the Republican base might react with fury to any explicit effort to relegate the former president to the political dustbin. In a vexing complication for Senate leaders, the chairman of their campaign committee, Senator Rick Scott of Florida, has spoken critically of impeachment and opposed certifying Pennsylvania’s election results — a vote that could undermine his ability to raise funds from big donors.

A number of state parties are already controlled by Trump allies, some of whom said Republican traditionalists would have to come to terms with their new coalition.

“What President Trump has done has realigned the political parties, and either the establishment of the Republican Party recognizes that or we don’t — and I believe that we will,” said Representative Ken Buck, who is also the Colorado G.O.P. chairman. He suggested that the party should be attentive to Mr. Trump’s working-class support and avoid being “hyperfocused on the suburban vote.”

In some respects, the party may still face the same irreconcilable pressures that have hobbled it for the past four years: on the one hand, Mr. Trump’s powerful cult of personality on the right; on the other, his deep personal unpopularity with the majority of American voters. As appalled as party leaders may be by the president’s conduct, they cannot win general elections if his die-hard supporters stay home or cast protest votes.

On paper, the G.O.P. should stand a good chance of recapturing one or both chambers of Congress in the next campaign, since the Democratic majorities are small and the party that holds the White House usually loses ground in midterm elections.

But Republicans are in a state of extreme disarray in the Sun Belt states that slipped into Mr. Biden’s column, and in several large Northern battlegrounds like Wisconsin and Michigan, they are confronting the likelihood of unruly Senate or gubernatorial primaries. The last time Democrats controlled the presidency, the House and the Senate, in 2010, Republicans won the House but failed to claim the Senate because some of their nominees were out of the mainstream.

The divisions may be playing out most acutely right now in the two historically red states that flipped into Mr. Biden’s column and elected three Democratic senators this cycle: Georgia and Arizona. Local G.O.P. establishments are reeling from those defeats, and Mr. Trump has battered local leaders with vehement — and false — claims of political perfidy.

Both states have elections for Senate and governor in 2022, offering hard-line Trump supporters a number of inviting targets.

In Arizona, state party officials who supported Mr. Trump’s attempts to overturn Mr. Biden’s victory there have initiated an effort to censure Gov. Doug Ducey, a Republican, over his public-health policies, as well as Cindy McCain and former Senator Jeff Flake, a pair of Republicans who backed Mr. Biden. Mr. Ducey may be the party’s strongest recruit for a Senate race next year.

Jonathan Lines, a former chairman of the Arizona Republican Party who is supportive of Mr. Trump, said he feared that an insular faction would cripple the G.O.P. at a moment when it needed to be rebuilding.

“It’s just destroying the party to go out and try to censure people,” Mr. Lines said. “It doesn’t show that they’re trying to attract new people to the party.”

And in Georgia, Mr. Trump has vowed to take down his former ally, Gov. Brian Kemp, for refusing to sabotage the election outcome in his state. This week, the state’s second-ranking Republican, Lt. Gov. Geoff Duncan, who rebuked Mr. Trump for his interference, demoted three state legislators who had sought to help Mr. Trump void the state’s election results.

Several Republicans said they hoped Democrats would overreach with their newly acquired power in ways that would unite the G.O.P. “Nothing unites a party like a common threat,” said Representative Steve Stivers of Ohio.

Yet Mr. Stivers, who ran the House campaign committee in 2018 and saw how Mr. Trump hurt the party, said he hoped the president would “step aside” in the fashion of his predecessors who have “had their time in the sun.”

And what if he doesn’t, and demands payback against the likes of Mr. Upton, a much-liked House veteran who backed impeachment?

“Then I max out to Fred Upton,” Mr. Stivers said