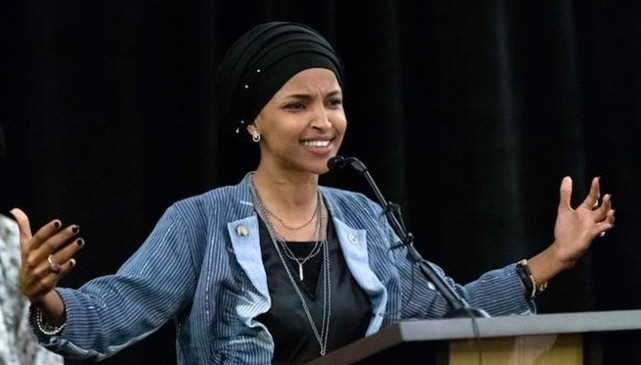 Rep. Ilhan Omar (D., Minn.) sent out dueling press releases on Tuesday: one celebrating the House passage of legislation that included debt relief for her native Somalia—and a second explaining her deci-sion to vote against that legislation.
“I am thrilled we were able to secure debt relief for Somalia today,” Omar said in one of her press releases on H.R. 1158. “This debt relief package is a major milestone that vali-dates the incredible pro-gress that Somalia has made in the past several years.”

Omar appeared to cele-brate the passage of the legislation on Twitter, where she has over 1.7 million followers, writing, “We got this done today! Inshallah Somalia is now set up to move towards progress and prosperity.” She made no mention of the fact that she had actu-ally voted against the legis-lation.
The bill passed Tuesday afternoon without her sup-port. Omar was one of 75 Democrats to vote against the bipartisan spending bill, according to the offi-cial roll call vote. The bill passed overwhelmingly in a 280 to 138 vote.

Omar explained her no vote in a second Tuesday press release, saying that the advantages of the bill, such as the debt package for Somalia, failed to outweigh the disadvantages. “We cannot be satisfied with making progress if we are falling short on our core duty as elected officials,” Omar wrote. Omar’s office did not respond to a request for comment.