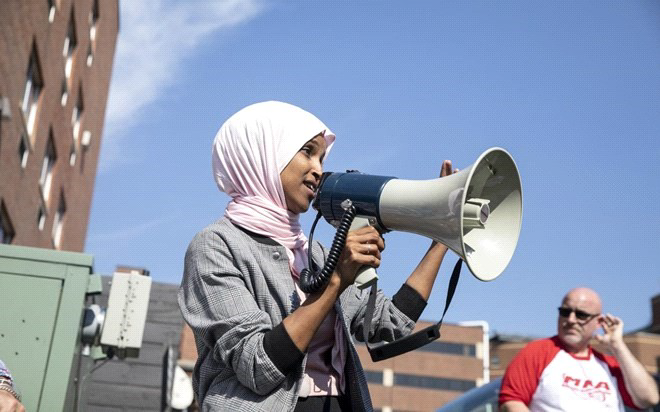 North Dakota state Sen. Oley Larsen, a Republi-can, urged his Facebook followers on Monday, Oct. 21, to share a black-and-white photo of a woman in a headscarf holding a rifle – an image, Larsen wrote, showing Rep. Ilhan Omar, D-Minn., at an “Al’ Qaida training camp in Somalia.”
“She is trying to get this picture blocked,” he warned, according to a screengrab captured by Forum Communications columnist Rob Port. “Share it everywhere.”
The photo was shot in Somalia, but that’s where Larsen’s claims diverged from reality. Viral memes tying Omar to that image have been thoroughly de-bunked – for one thing, because the picture was taken in Mogadishu more than four years before Omar was born.
Larsen eventually de-leted the post, as well as a follow-up comment calling Omar a “terrorist,” but he has yet to comment on why he shared the image. Larsen didn’t immediately respond to a message from The Washington Post.
On Monday evening, Omar slammed the Repub-lican and lashed out at Facebook for allowing inaccurate posts to spread. The freshman Democrat, who has released death threats she has received, argued that such false-hoods add fuel to the vio-lent rhetoric she faces.
“This is pure propa-ganda designed to stir up hate and violence coming from a GOP state rep,” she wrote on Twitter.
“Facebook’s unwilling-ness to crack down on hate speech and misinformation is not just threatening my

life, but our democracy.”
Omar, a Somali refugee and one of the first two Muslim women in Con-gress, has become a light-ning rod for the right, with President Donald Trump repeatedly targeting her. Trump in July demanded that she and three other freshman Democrats “go back” to the “crime in-fested places from which they came.”
That vitriol has helped a number of false claims to gain traction on social media about Omar, a natu-ralized U.S. citizen who came to America when she was 12.
The photo shared by Larsen has been among the more popular falsehoods – so much so that the Asso-ciated Press issued a fact check in August about the image, which was taken by an AP photographer in the Halane area of Somalia’s

capital on Feb. 25, 1978.
“Fact checking outra-geous claims like this must suck!” Omar tweeted at the time. “It seems like you can make any kind of dangerous, disgusting and disturbing claim against me and have it get trac-tion.”
The image found trac-tion again with Larsen on Monday. The Minot, North Dakota, legislator, who owns an insurance firm and previously worked as an educator and mechanic, was elected to the state Senate in 2010 and describes himself as having a “strong moral compass and constitutional conservative values.”
Larsen reportedly left the debunked image up on his page for hours after Port wrote about it on his blog, and appeared to dou-ble down on his claims in the comments section. He responded to one critic by writing, “I’m begging to let everyone know she is an elected terrorist.”
By late Monday, though, he had deleted the original post and his comment. His Facebook page still in-cludes another post about a

GOP candidate challeng-ing Omar, where he wrote, “hope people get off the couch and take time off work to go vote her out.”
This article was written by Tim Elfrink, a reporter for The Washington Post.