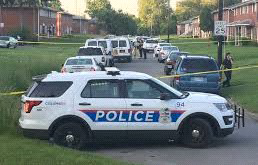 Data from the FBI show that Columbus had the most hate crimes reported in the state in 2018, but a lower rate per capita than Cleveland or Cincinnati. FBI statistics show Colum-bus has the highest number of reported hate crimes in the state, but a lower rate per capita than some other cities. Most of the crimes involved racial bias.
The statistics, released Tuesday, show that 350 hate crimes were reported statewide in 2018, with 71 reported in Columbus. The next-highest total was in Cleveland, with 38, and Cincinnati with 31. The report notes that the popu-lation of Columbus is lar-ger than the combined populations of Cleveland and Cincinnati.
Jennifer Knight, acting Columbus police deputy chief, said the FBI’s statis-tics show that while Co-lumbus had the most re-ports of hate crimes, the rate per capita is actually less than in Cincinnati or Cleveland. Based on the FBI’s population informa-tion, there was one hate crime report for every 12,303 people in Colum-bus, Knight said. Cincin-nati had one reported for every 10,065 people and Cleveland had one for every 10,122 residents.
According to the data, nearly 60% of the hate crimes reported in Colum-bus, or 42 out of 71, were racially based. Nineteen concerned sexual orienta-tion and six involved relig-ion. The report said there were no reported crimes based on gender or gender identity.
The FBI’s data uses in-formation from the Uni-form Crime Report, which is fed by law enforcement agencies across the coun-try. Ohio ranked eighth nationally in the number of hate crimes reported, ac-cording to the data. Cali-fornia had the most re-ported (1,063), followed by New Jersey (561), New York (523), Washington (506), Texas (455), Michi-gan (431) and Massachu-setts (352).
The Rev. Jefferey Kee, pastor at New Faith Baptist Church and a member of Mayor Andrew J. Ginther’s search committee to find the next chief of police in Columbus, said the report highlights what he and others have been saying for years: racism still exists.
“It’s not surprising to me that Columbus, when it comes to Cincinnati or Cleveland, scores beyond them with Columbus hav-ing a culture that is a safe haven for these kinds of hate and biases against race and color,” he said.
“What you’re seeing is relatively comparable num-bers,” Knight said. “These crimes have a significant impact on the victims and the groups targeted, but they have a devastating effect on the larger com-munity.”
Having an appropriate law enforcement response and gathering the right evidence can “quell fears and reassure that commu-nity,” Knight said. But an inappropriate or incom-plete response can “allow prejudice and anger to fuel further violence.”
Kee said there is also a policing issue, represented through the Matrix con-sulting group’s re-port finding that black community members — who make up about 28% of the population — are in-volved in about half of all significant uses of force with Columbus police. He said that fosters a larger community culture of ra-cism.
Knight said she believes the police division as a whole has encouraged peo-ple to come forward and report hate crimes so offi-cers can help bring those responsible to justice. That includes prosecuting cases with penalty enhancements for hate crimes, if the moti-vation for the crime can be proven to be based on bias. “Proving what was in someone’s mind is very difficult,” she said.
bbruner@dispatch.com
@bethany_bruner